It’s Now or Never: Starting a Farm After 50

As a couple establishes their first farm later in life, they learn to live with wild pond creatures. 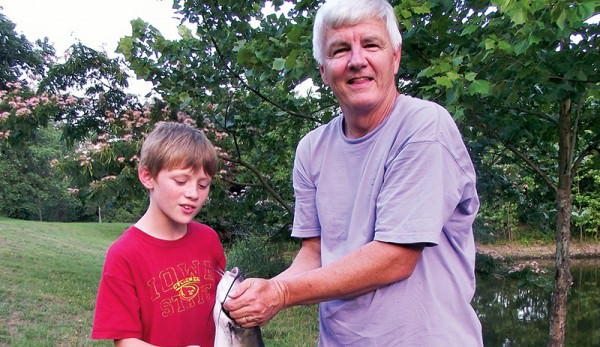 My parents were quietly reading in their favorite chairs when I, their 9-year-old son, approached them with a request: “May I start a vegetable garden in the backyard?”

They looked at each other in wonder. Neither one of them had any interest in gardening. “Uh, well … sure,” my dad answered. After a while, curiosity brought Mom and Dad out to the backyard. There, I was laboring away with a shovel longer than myself. What joy I felt when my crops started showing up on the family dinner table. Soon, using a cane pole, I also caught fish for the dinner table. My life’s dream became to one day have my own farm with a pond to raise vegetables, fruit and fish.

Because of circumstances and finances, my 50th birthday passed while my wife, Kit, and I were living in an apartment in a city. “It’s now or never,” I told her. Together, we found 23 acres near Arkansas’ Ouachita National Forest.

A house on the property was a prime candidate for a bulldozer: No one in their right mind would move a family into that house. The land itself was completely overgrown with briars and invasive species. Although this place had once been a farm, I’ll bet that farmer had used mules to plow. But the old farm also had rich, brown dirt and a beautiful pond, deep and spring-fed, about an acre in size.

We immediately started camping out while we repaired the house; DIY books and building-supply stores became our best friends. After just six months, we were able to move in our furniture. Five years later, people wouldn’t believe what a wreck the house had been. The land we reclaimed a foot at a time, rooting out privets and honeysuckle by hand. Eventually, we would raise enough quality fruit and vegetables to sell at a local farmers market.

Our biggest triumph, though, was optimizing the pond ecosystem. Today, all kinds of wildlife visit our pond. We manage it carefully for fishing and allow children to do the catching. Kids big enough to securely hold a rod almost always catch a 10- to 20-pound catfish. (Sometimes, two smaller kids have to hold the rod together.) Plenty of bluegills entertain the smaller children, and everybody enjoys feeding the huge bass, which are tame enough to eat from our hands.

On the other hand, a pond can also bring anguish. A creek runs through our property about 25 yards from the pond. Beavers try damming the creek, but floods always wash them out. They like our pond better anyway. These destructive rodents aren’t cute like the ones depicted in cartoons: They dig tunnels and, unchecked, can pierce pond dams.

Beavers also have a decided taste for nonnative trees.

“What are the odds of beavers getting to this tree?” I thought, as I planted a birch among hundreds of native trees. Pretty good, it turned out. The next morning the birch was a 6-inch stump. Beavers then cut down Kit’s weeping willows, and during one flood, a beaver even treaded water to gnaw down my cypress tree above an anti-beaver wrapping. Our peach tree, although far away from the pond and next to the back door, didn’t have a chance. In desperation, we built a 400-foot welded-wire fence between the pond and the creek, but a determined beaver will actually bite through the wire.

There is one pond pest worse than a beaver: a river otter. Unlike beavers, otters are cute. Early one morning, Kit and I marveled as one sat eating a bluegill as if it were a hotdog. In that instant, the otter rolled into the water and surfaced with one of my pet bass clutched to its chest. The bass was too big for the otter to get its arms around.

That otter loved our pond and started slaughtering the pond-confined fish. It liked to drag fish onto our small pier to play with them. Bass and catfish died there with hardly a bite taken.

To solve the problem, I purchased a big live trap and put in a $30 slab of fresh fish. As I was anchoring the trap so that the otter couldn’t drown when caught, suddenly it was sitting on the pier with me! There and back in the water, the otter fussed at me for invading its territory. With a net, I might have scooped it up. After that, the otter certainly wasn’t going into any trap; however, the trap did catch a rather humorless raccoon. After the raccoon enjoyed the $30 fish, I let it go with a warning.

Eventually, I outwitted the otter. While it was playing in the creek, I went over every inch of the fence and carefully plugged every beaver-made gap. Beavers can bite through wire, but otters can’t. Blocked from the pond, the otter then meandered on up the creek to cause trouble somewhere else.

Reclaiming a house and farm is the most difficult work I have ever done. Yet, this farm is the fulfillment of a lifelong dream. Not even a few pond pests can spoil our joy. And, in truth, the pests have also given us memories, which make the experience even richer.

This article originally appeared in the July/August 2015 issue of Hobby Farms.

Drew Coons is a former research engineer and speaker for an international nonprofit. Now retired, he and his wife, Kit, farm vegetables and catfish, plus provide a country experience for many guests.