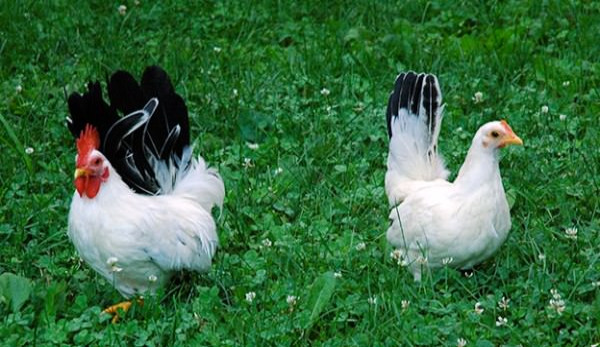 Use: This extraordinary, ornamental Japanese Bantam chicken breed was originally favored by the aristocratic class of Japanese society as ornamental garden birds. Hens make wonderful mothers and will lay an average of 1 very small, creamy-white egg per week.

History: The Japanese Bantam arrived in Japan as early as the 7th century, perhaps from Indo-Chinese stock. In Japan, they are called Chabo, which translates to dwarf or bantam as well as to a type of bonsai tree. The Japanese Bantam was admitted into the American Poultry Associationās Standard of Perfection in 1874.

Conformation: The Japanese Bantam has a large, upright tail that sits forward on the body creating a V-shaped appearance. Wings are large and held at a downward angle, which in combination with their short, yellow shanks, causes the wings to touch the ground. The APA recognizes the following color varieties: Barred, Black, Black-tailed Buff, Black-tailed White, Brown Red, Gray, Mottled, Wheaten and White. The breedās comb, wattles and earlobes are bright- or dark-red and medium to large in size. Japanese Bantam cocks weigh 26 ounces and hens weigh 22 ounces.

Special Considerations/Notes: The Japanese Bantam can be a difficult chicken breed for new poultry keepers because its form and plumage is difficult to achieve and requires extra attention. It also suffers from an allele (an alternative form of a gene) combination that kills about 25 percent of chicks shortly before hatching. The breed is not cold-hardy, and during winter months, it will require insulated coops, sometimes with the addition of supplemental heat. The American Bantam Association counts them among the 10 most-popular chicken breeds, proof that poultry enthusiasts believe them to be worth the extra effort. When allowed to free-range, Japanese Bantams will happily forage and fly. They are tamed easily, though cocks might be aggressive.