These tubors have grace our garden each year. 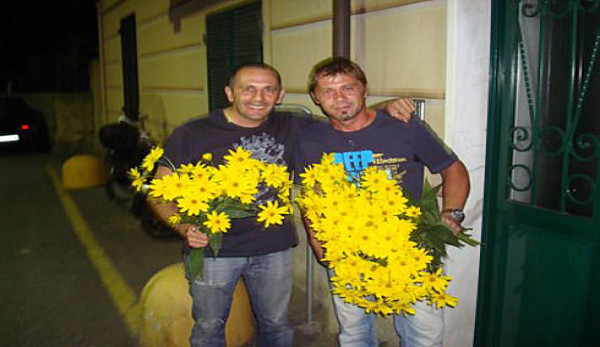 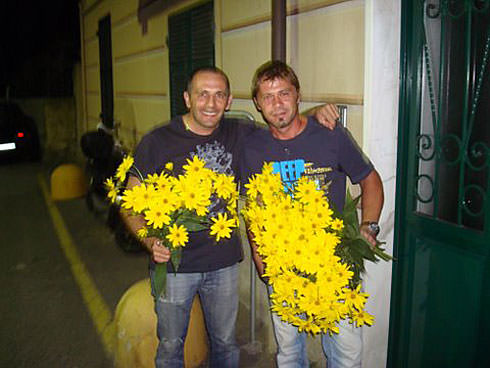 These two scofflaws went down to the creek and picked these wild flowers.

Our Jerusalem Artichokes, Helianthus tuberosus, which are in bloom in the creek that runs in front of our house, have produced an impressive amount of flowers. Hardly anybody climbs down into the creek during the year, but when the girasole, or sunflowers, are blooming, several different adventurers head down to the creek to cut armfuls of the yellow flowers. Todayâ€™s photo is of a couple of the friendly neighborhood neâ€™er-do-wells with their swag from the creek.

Weâ€™ve tried growning some of the tubers harvested from the creek in our garden, but growing them in dirt didnâ€™t make them bigger. Using some big, fat artichokes we had bought at the market, we now have a commercial variety planted. I cut the tubers up just as one would cut up a potato to make a bunch of planting eyes and planted those on the edge of one of the upper terraces.

The clump has been growing there for two years now, and Iâ€™m going to harvest it a month from now, after it stops blooming. While the wild plants in the creek are up to 10-feet-tall, the cultivated variety in the garden is only about half that size. Iâ€™m not worried because Iâ€™ve already tested them by digging up one tuber, which seemed to be plump. Hopefully, weâ€™ll harvest enough tubers for a few meals and then replant the remainders. I think the plants will grow more enthusiastically if I move some of next yearâ€™s artichokes to a better-watered bed.

Here in Italy, the roots of Jerusalem artichokes, topinambur, are commonly sold in limited quantities at the fresh vegetable markets. In our home, we eat them a number of times each season, usually steamed then served in a broth. Iâ€™m quite fond of the flavor and the somewhat-crunchy texture. This vegetable would be great with a steak or pot roast, which we donâ€™t make in our home, but we do sometimes mix the topinambur with other steamed vegetables, which works quite well.

Jerusalem Artichokes are native to the eastern half of the United States, and both wild and cultivated varieties are harvested somewhat frequently. However, consumer use is low, and there isnâ€™t a large market demand for the crop. There was an amusing â€śboomâ€ť in Jerusalem artichoke planting in the 1980s, but the optimism actually turned out to be a fraud that fooled some Midwestern farmers into planting large areas to this crop. Nonetheless, this sunflower cousin consistently appears on many â€śperhaps we should be growing more of thisâ€ť lists, including mine.