What to Look for When Buying a Jigsaw

As with many power tools, if you're not familiar with it, you can quickly become overwhelmed by features and terms you don't understand. Here are the basics about the jigsaw. 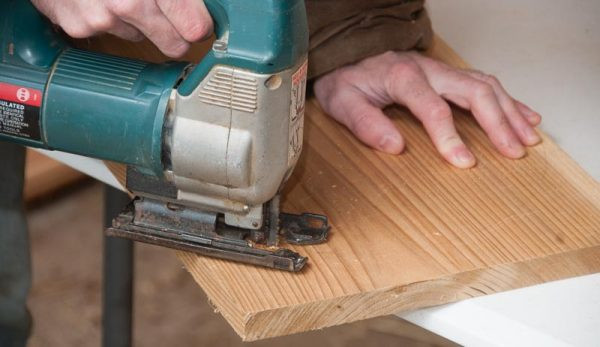 Have you ever wondered where the term ‚Äújigsaw puzzle‚Äù comes from? It‚Äôs simple‚Äîback in the days when jigsaw puzzles were made of real wood instead of cardboard, the process of cutting the puzzle into oddly-shaped pieces was achieved by means of a jigsaw.

A jigsaw is a crucial tool for woodworkers and carpenters. A jigsaw uses the back-and-forth action of a reciprocating blade to cut through wood (and even some types of metal), and because the blade is small (and oriented vertically when the unit is held level with the ground), you can use a jigsaw to cut all sorts of unusual shapes and patterns into wood. Need to cut a circular opening in the middle of a tabletop, and do so without damaging the rest of the table outside the circle? A jigsaw is the tool you need.

Like with many tools, when you shop for a jigsaw you might be overwhelmed by terms and features you don’t understand. But never fear! Here are a few of the key aspects to consider when buying a jigsaw.

How Many Strokes Per Minute?

The ability to run the blade at varying speeds is a common feature available even in inexpensive models, though nicer models offer a greater number of speed settings and faster top-end speeds. The maximum speed is measured in strokes per minute (often shortened to SPM), or the number of times that the blade completes an up-and-down circuit in a single minute. Some models can exceed 3,000 SPM.

The strength of a given jigsaw is determined in large part by the amp rating of the motor. Inexpensive models for light work might have a 4-amp motor, while more expensive (and powerful) models might have 7-amp motors.

Battery-powered jigsaws offer the convenience of working without a cord and can be used away from sources of electricity. Then again, batteries aren‚Äôt exactly lightweight, so a battery-powered jigsaw is much heavier and more tiring to use than a corded model.

What Is the Stroke Length?

Yes, the blade of a jigsaw moves up and down, but did you know some models allow the blade to move forward and backward as well? This design is called an orbital jigsaw and offers several advantages over straight-cutting blades, including increased power for cutting through tough materials. Similar to the factors surrounding stroke length, the less-flashy straight-cutting blades are arguably superior for delicate cuts.

Jigsaw blades are removable and replaceable, and if you change blades a lot, it‚Äôs nice to have a model that accepts T-shank blades, which are faster and easier to remove and install than U-shank blades.

We‚Äôve covered the main features that define jigsaws, but nicer models add plenty of extras to enhance their ability and make your life easier. Examples include laser guides, adjustable base plates for making bevel cuts, and sawdust blowers and collectors.

Have you bought a jigsaw? What features did you look for, and what did you learn from your purchase?