Chicken-keeping can be calm and fulfilling. But when a predator breeched this contributor's Orpington coop, the day quickly turned manic. 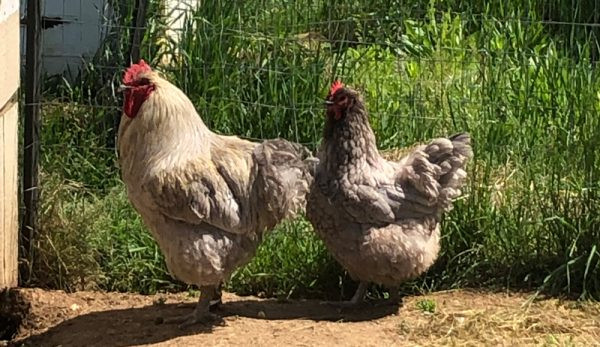 Turkey buzzards were circling overhead as my son Jaeson and I slowly closed in on Ginger Bean. He had ducked between the Ameraucana and Orpington runs in an attempt to escape our clutches.

Nearby, Baci Ancona led his ducky cohorts, Speckles and Azure, in a dash across the yard toward our shady deck. Meanwhile, Alex Royal Palm hooted out her uncertainty about having Butters, Brioche, Selene and Fitzgirl in her pen.

Just another manic Monday on the farm. I’d wish it were Sunday, but yesterday was most definitely not my fun day.

Yesterday morning started easily enough. I checked on Natalya Silkie (brooding contentedly on her eggs) and on Kiki and Butter Duck, sequestered safely in the hospital pen and recuperating from injuries inflicted on them by the older Ancona drakes.

I released Thomas Orpington’s crew, then went to open the pop door on the coop housing our new Orpingtons.

And I saw a corpse on the ground inside. The remaining birds were clustered in a corner.Â

Here are a few steps you can take to keep your chickens safe from predators.

Yelling for Jaeson, I released the new Orpingtons, who scattered within their run.

A quick examination revealed the victim to be poor Fitz. She was one of our black Orpington hens and the mother to more than a dozen birds, including our rooster Ginger Bean.

Jaeson arrived, his face blanching at the sight the carnage. “But it was daylight when I locked up,” he informed me. “And I checked the coop and did a head count. There was nothing in there but chickens!”

But somehow, something had gotten in, with dire results.

Jaeson buried our poor mama hen and got to work raking out the new Orpington coop. I examined the birds that had been with Fitz when disaster struck. Only Brioche bore any injury: a quarter-sized patch of bare skin.

Other than possible trauma from watching the gentle Fitz die, the rest of the flock was fine.

Shoring Up the Coop

Having been told by a friend that he’d discovered a hole in his coop that had allowed a weasel in to feast, I carefully checked every inch of dirt around the henhouse.

To my chagrin, I found four holes. One led well down into the groundâ€”possibly a chipmunk or voleâ€”but the other three clearly were intended as access points. One had succeeded. I could fit my arm in from the outside and wiggle my fingers inside the coop.

I quickly consulted with my poultry go-to guy, Dr. R.M. Fulton at Michigan State University. His rule of thumb: If a raccoon can fit its head in, it can fit its whole body in.

Our farm, of course, is situated smack between two of Michigan’s largest forested state public lands … and, of course, it’s raccoon baby season.Â

Jaeson and I spent the next hour gathering field stones from under our deck. Once I carefully packed them into all the holes, Jaeson added clay-rich soil and tamped it down.

We then checked the entire structure for more holes. Finding none, we set bricks on top of the tamped-down dirt and evened the ground out in the coop’s interior. We added fresh litter and let the birds return, relieved that the drama had been simple to handle.

I started early, for my day had full plans. Natalya was still on her eggs (hatch already!) and Kiki and Butter Duck quonked happily as I retrieved their water bowl to clean and fill.

As I headed toward the hose, something drove me to peek in on the new Orpingtons. I’m still not sure what. I wish I hadn’t.

My beloved Stormy, one of my three favorite hens, was lifeless on the ground, her chest cavity ripped open.

I practically threw the duck bowl down as I raced for the house. My husband, Jae, came bemusedly to the kitchen door, thinking I’d locked myself out. I quickly shared the news and shouted for Jaeson.

Jaeson was beside himself. “But we took care of all the holes!” he wailed. He gently removed Stormy’s body while I shepherded the five remaining chickens away from the scene of the crime.

As Jaeson raked out the carnage, I examined all the holes we’d filled yesterday. Everything was exactly as we’d left it. I knelt on the ground and ran my hand around every inch of the coop, finding no new holes.

Once the shavings, feathers and bits of Stormy had been removed, we searched inside for access holes and found nothing.

The nestbox lids were locked shut. All the vents were securely covered. There were no gaps between the wood planks.

To rub salt into the wound, our Â live trap, which had been set up beside the coop, was empty, still baited with a full plate of food. We were stumped.

“It’s not safe in there,” Jae pronounced. “We’re going to have to move the birds.”

Thinking about getting chickens? Keep these important tips in mind.

There was only one feasible option. The main Orpingtons and the new Orpingtons would finally have to merge.

Two problems, though: Alex, our oldest girl at almost 8, would not be thrilled at her coop and run were being invaded by “new” birds, and Thomas Orpington, our five-year-old rooster, would not survive a battle for domination against Ginger Bean, the huge, strapping two year old who was king of the new Orpingtons.

The solution? Move gentle Thomas and his favorite girl, Mariel, in with the ducks.

Thomas and Mariel liked to visit the ducks so much that we had installed a perch in the duck house. And thus went the morning: a game of musical coops.

The moment we opened the gate to put Thomas and Mariel in, Baci, Speckles and Azure dashed out. Ducks might waddle, but, when they have a destination in mind, they are speedy!

While Jaeson attempted to corral the trio of drakes, I transferred the four new Orpington hens to the main coop. This caused poor Alex to retreat to one of the nestboxes and start yipping in distress.

Seeing all the commotion, Claude Orpington, Thomas’ brother and frenemy, launched himself out of his run. He took his turn battling Thomas through the fence and Ginger Bean in the yard.

I caught the normally gentle Claude and returned him to his run. Then Jaeson and I teamed up to capture the elusive Ginger Bean. (We finally trapped him next to the house.)

Within moments, Ginger Bean was lording it up in the main coop. Alex stopped her hooting.Â

The turkey vultures, however, had increased in number, reminding us that Stormy still needed to be buried. And through this all poor Kiki and Butter Duck waited patiently for their water bowl to be filled.

I made sure they got an extra treatâ€”my apology for the morning chaosâ€”before heading in for a much calmer afternoon of computer work. So far, I have only been interrupted by Jaeson, who summoned me to the kitchen door to see what we’d caught in the baited live trap: Dolly and Laetitia Ameraucana, happily chowing down on food we’d used as bait.Â