Ancient, elegant Karakul sheep are one of America’s most uncommon sheep breeds. 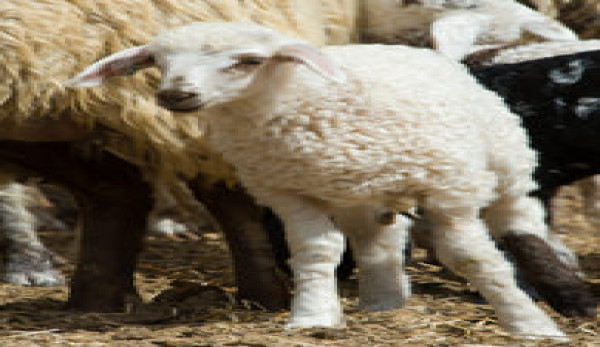 Descended from the fat-tailed sheep of the Middle East, Karakuls are nevertheless as American as pizza and chop suey. Though their ancestors hailed from the former emirate of Bokhara, a land located in present-day Turkmenistan and Afghanistan, early breeders tweaked the sheep breed’s genetics, making today’s American Karakul unique among the world’s fat-tailed sheep breeds.

North American breeders raise Karakul sheep (pronounced kah-rah-COOL, CAR-ah-cool or CARE-ah-cull and named for a city in old Bokhara whose name means “black lake”) for their wool and their mild-flavored meat. Internationally, the breed is considered a fur sheep still raised for the pelts of newborn Karakul lambs.

Pelts of newborn Karakul lambs are known in the fur trade as Persian lamb or astrakhan. Neonatal Karakul lambs are coal black with soft, tight curls; they are slaughtered for their pelts prior to 3 days of age, lest their lovely coats begin to lose texture. Fetal lambs from ewes slaughtered to harvest their lambs’ pelts are called broadtail or karakulcha; these high-priced, glossy black moiré-patterned pelts resemble watered silk. The Karakul fur trade is alive and flourishing in Central Asia, Africa and parts of South America, but not in North America. Still, this industry is what gives the Karakul its history and should be recognized.

Karakuls in America
In the late 19th century, when breeders first imported Karakul sheep, the name of the game was Persian lamb; fur was on breeders’ minds. According to “The Karakul,” an article in the 25th Annual Report of the New York State Department of Agriculture in 1918, America’s first Karakuls—five rams and 10 ewes—were imported from Russia in 1908 by Dr. C.C. Young of Belen, Texas, for $25,000. He imported a second group in 1913 and a third in 1914 for a total of 31 rams and 22 ewes. Importations by other breeders in the U.S. and in Canada continued through 1929, but the number of sheep imported was relatively few.

To expand the sheep breed and produce lamb pelts for the trade, imported Karakuls were crossed with sheep of other breeds. Crosses to “tight wool” breeds such as Shropshires and Rambouillets produced lambs with average pelts, but crosses of Karakul with loose-locked “long wools” like Lincolns, Leicester Longwools and Cotswolds truly shone. C.C. Young himself writes in the July-September 1912 issue of American Breeders Magazine, “Quarter-blood Karakul-Lincoln skins have been produced in Texas equal in luster and tight curl development to the best of the so-called Persian lamb skins, and as for the half-blood Karakul-Lincoln pelts, there is nothing Asia can produce that can compare with them.” Skins from the best Karakul-Lincoln lambs brought $10 each at the furriers’ market, the same as imported Persian lamb. At the same time, Young reports, regarding lambs raised for the meat market, that “Karakul-Shropshires with the Karakul strain predominating, show a wonderful increase in weight and lambs at 4 and 5 months old have been found to weigh from 80 to 100 pounds. The Armour Packing Company of Fort Worth, Texas, vouched for these facts and also stated that the Karakul strain seems to have the faculty of removing the disagreeable woolly and musk-like flavor peculiar to our tight-wools.”

By 1920, when Professor Charles S. Plumb updated his classic textbook, Types and Breeds of Farm Animals, flocks were well-established in Canada (Prince Edward Island, Nova Scotia, New Brunswick and Alberta for a total of about 600 head) as well as Texas, New Mexico, Kansas, Colorado, Maryland and New York.

While the American Persian lamb industry did not withstand the test of time, during its heyday, the American Karakul evolved. Because so many breeds were used in its development, the breed was never uniform—a trait today’s Karakul fanciers appreciate. Horns or no horns? Long, floppy ears or no external ears at all? Double or single coat? Solid brown or gray or fleece of colorful hues? There are Karakuls to suit every taste.

Today, there are fewer than 2,000 American Karakul sheep in the world. The breed is listed as “threatened” on the American Livestock Breeds Conservancy’s conservation priority list, having fewer than 1,000 annual registrations and an estimated global population less than 5,000. It might, however, be the perfect breed for your small farm.

Conformation and Color
Karakuls are medium-sized sheep, making them easier to handle than today’s typically larger breeds. Rams tip the scale at 175 to 225 pounds; ewes range from 100 to 150 pounds. They are elegant sheep, alert and active but friendly and biddable with handlers they know.

Karakuls are tall, with long, narrow bodies set atop long, light-boned legs with small, strong feet. Unlike most other breeds, Karakuls stand tallest at the loin and have sloped rumps and noticeable dips in front and behind the withers. They have long, narrow, often Roman-nosed heads with prominent foreheads and a slight indentation between their wide-set eyes. Ears are generally thin and pliable, long, and pointing downward and slightly forward, though some have smaller, thicker-textured ears; a few sport tiny ears reminiscent of LaMancha goats. Rams may be naturally polled or horned, and their horns may be short or curl into large, curved spirals; ewes are usually polled, but some have horns.