Karakul wool is an ideal medium for weaving fine rugs and saddle blankets as well as for felting. These sheep are one of the most ancient breeds. 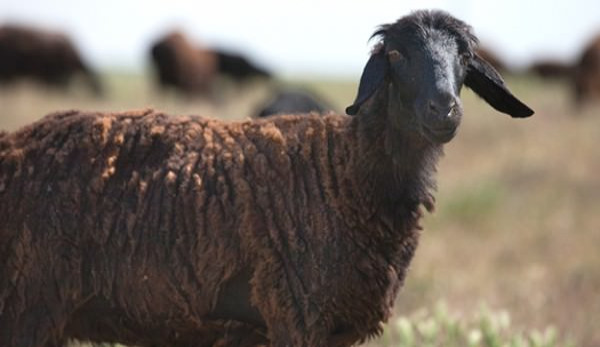 Use: Karakul wool is an ideal medium for weaving fine rugs and saddle blankets as well as for felting. While not meat sheep per se, Karakul flesh is lean, fine-textured, and tasty.

History: Karakul fat-tailed sheep are one of the world’s most ancient breeds. Archaeological evidence suggests they were raised for their skins in the Middle East as early as 1400 B.C. Karakul felt has been fashioned into dwellings called yurts since 400 B.C. and Persian carpets since at least 500 B.C. The breed’s name is derived from Qara Qul, meaning “black lake” in several Turkic languages, probably after an ancient village of the same name in the former emirate of Bokhara located in what’s now Uzbekistan. Karakul sheep were (and are) kept throughout the region for milk, meat, tallow, and wool, but especially for the pelts of their fetal and newborn lambs. Due to a dominant black gene in this breed, most lambs are born with coal black coats. To ‘harvest’ broadtail (karakulcha) moirĂ©-patterned pelts, pregnant ewes are slaughtered and their fetal lambs skinned; Persian lamb pelts with flattened curls are taken from newborns less than three days old (for a discussion of Karakul sheep and pelt production, download “Karakul Sheep and Lamb Slaughter for the Fur Trade.” Karakuls were imported to the United States between 1908 and 1929 in an effort to produce domestic Persian lamb; however, American pelt-producers infused the blood of other breeds to the extent that the pelts they produced lacked value and the experiment was subsequently abandoned. While the Middle Eastern Karakul is quite plentiful (there are an estimated four million in Uzbekistan alone), the American Karakul is listed on the American Livestock Breeds Conservancy’s Conservation Priority List as a Threatened breed (“Fewer than 1,000 annual registrations in the United States and estimated global population less than 5,000”). Additional conservators are needed.

Conformation: The Karakul is a fat-tail sheep that deposits fat in the upper part of its tail as a hedge against starvation, always a possibility in the harsh climate in which it evolved. Its long-stapled (six to 12 inch), low-grease fleece ranges from silky soft to coarse textured; some Karakuls are double coated, others aren’t. Newborn lambs are usually coal back but most Karakuls change, as they age, to hues as diverse as silvery blue, gray, golden tan and reddish brown, white, and pied. Karakuls are tall, narrow sheep with long bodies; ewes range from 100 to 150 pounds, while rams run 175 to 225 pounds. Rams can be polled or horned; ewes are generally hornless. Some Karakul sheep even have wattles!