The former ballerina talks to us about how babydoll sheep have become the focal point of her idyllic farmette in Oklahoma. 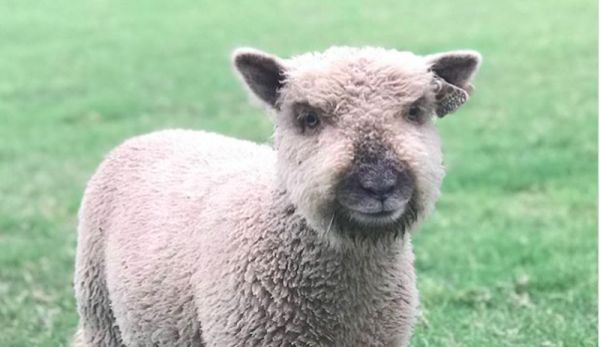 “Our society and culture is so immediate gratification-based,” says Katie Selvidge.

Selvidge, a former ballerina who lives in Oklahoma, runs an affectionately-named “farmette” alongside her husband, Nate.

“We craved the hard work and connection to nature living on land can bring and wanted our kids to experience that,” Selvidge continues. She adds that early on in their marriage they “decided we wanted to raise our kids in a home where they had to be hosed down before coming inside each day.”

Along with tending to a modest garden, Selvidge’s land also houses cows, chickens and babydoll sheep. With the latter animals having emerged as the stars of her Instagram account, we spoke to Selvidge about the benefits of living with babydoll sheep and overcoming the physical demands of shearing.

We also got the scoop on why her sheep are named after characters from the Marvel universe.


The Joys Of Babydoll Sheep

Val says hi. We’ve been quiet for no reason other than it’s cold and gloomy, and hiding on the couch with silly socks and tea until it’s time to feed the animals or make dinner sounded like a good idea. How do you deal with winter weather? #babydollsheep #refinedpresets #happyfarmily

Selvidge decided to populate her farmette with babydoll sheep because “I thought they’d be a perfect practice breed for me as I educate myself to decide if I’d want to raise sheep for meat later on.”

She adds that the small size and genial nature of babydolls also made them a natural fit for her own young daughters.

“Our babydolls are gentle and honestly very sweet,” she says. “It took a few months for them to warm up to me and not be afraid to walk up to us. They are prey animals, so they aren’t going to be like a pet unless they were bottle fed.”

Selvidge’s sheep are all named after characters from the Marvel cinematic universe.

“It was more of a joke with my husband that if I was going to get these sweet little fluffy lambs, he would get to name them,” she explains.

It turns out certain sheep have begun to mirror their superheroes.

“It’s funny how some of them have seemed to adopt their namesakes in their attitudes. For example, Valkyrie is probably our favorite female character. And our Val is definitely the most personable of the flock.”

Learning How To Shear Sheep

Looking back on her first-ever attempt at sheep shearing, Selvidge calls it “embarrassing to say the least!” Under the guidance of a certification training course at Shepherd’s Cross in Claremore, Oklahoma, she recalls being “so nervous I was shaking.”

It took almost an hour to tackle the first sheep, she recalls.

“But the teachers were so kind and gave me encouragement and tips. I went back the next day much better and much faster,” says Selvidge.

She’s improved to the point of recently gaining official certification in sheep shearing.

Learn how you can make sheep shearing day safe, efficient and fun.

Getting Physical During Shearing Sessions

Peggy is a boss…even when her face is covered in alfalfa dust. ? ⠀⠀⠀⠀⠀⠀⠀⠀⠀ This sweet girl had her ear bit by a neighboring dog when she was a lamb, see how it sags? But I think she was made stronger for it. ⠀⠀⠀⠀⠀⠀⠀⠀⠀ When we had the barber pole worm scare (barber pole season is coming back soon…boo) she was the healthiest. She's always the 'lookout' when the others are grazing. And she is overall the toughest ewe of the flock. ⠀⠀⠀⠀⠀⠀⠀⠀⠀ Sometimes our challenges do define us. But we can choose how they define us. Do they make us a victim or do they make us stronger? ⠀⠀⠀⠀⠀⠀⠀⠀⠀ Be like Peggy. ? ⠀⠀⠀⠀⠀⠀⠀⠀⠀ #babydollsheep #mycountryhome #iamcountryside #countrysidethemeoftheweek #babydollsheepregistry #babydollsheepofinstagram #babydollsouthdown #sheepofinstagram #cutesheepintheworld #livingthecountrylife #hobbyfarmer #howihaven #womenwhofarm #farmgirl #ranchlife #happyfarmily #cultvatingahomestead

Before embracing the farming life, Selvidge was a ballerina. She studied at the Houston Ballet and the American Ballet Theatre in New York. The experience, she says, has proved beneficial when it comes to tackling the physical challenges of sheep shearing.

“My ballet training from years past came in handy with the balance and legwork,” she explains. “Sheep shearing, in my experience, requires a lot of balance and strength in your adductors for tipping the sheep correctly and holding it in position. But also, back strength from bending over—even more so for babydolls—and holding your position for long periods of time.”

The Rewarding Nature of Babydoll Sheep

Finally, if you’ve been considering adding babydoll sheep to your own homestead, Selvidge offers these uplifting words of encouragement.

“Raising sheep provides you so many lessons about life—how there is value in silent strength, that trust must be earned through commitment and that patience will be rewarded.”