Can You Identify the Summer Songs of Katydids?

Katydids have numerous calls of different lengths, and robotics researchers have even used the insects to send messages into the environment. 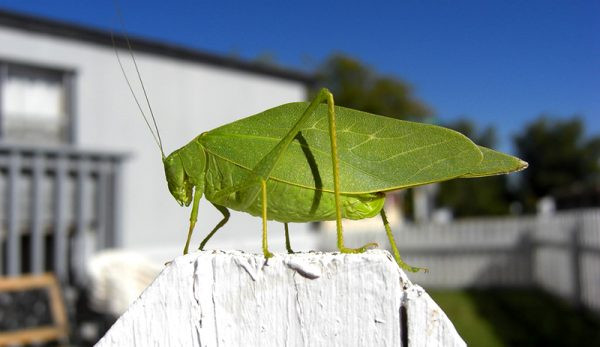 Katydids are often heard but seldom seen, masters of camouflage in green or brown leafy places. The are also known as bush crickets, and more than 6,400 katydid species are scattered across the world. Related to grasshoppers as well as crickets, they are distinguished from the hoppers by much longer antennae and from crickets by raspy sounds rather than clear and crisp calls.

In some species, the color of the male katydid is in tune with the hours of daylight rather than the dominant color of the surroundings. In winter, they molt to turn brown while in summer they become green. Broad leaves aren‚Äôt their only host; some types live almost invisibly in grasses, with their heads downward in the grassy bunches and only wings and hind legs extended like blades of grass.

Primarily leaf-eaters, katydids sometimes chew flowers and other plant parts, but they aren‚Äôt as problematic in gardens and farms as many other insects. Sometimes they even help clean up, eating dead insects or aphids.

For an insect trying to find a mate of its own kind under the cover of night and in a forest of foliage, it‚Äôs critical to send a clear message and be heard. Females are better listeners than males and are equipped with sensitive tympanum, similar to eardrums, on their front knees. These pick up the vibrations sent out by the males rubbing specialized wing parts together. Coneheaded katydids make the loudest insect song in North America; they can be heard as far away as one-third of a mile.

Curious about the night sounds in my own backyard, I began what I like to call a process of forensic acoustic ecology reconnaissance‚Äîor, listen and learn. With a handheld recorder I captured a few seconds of nature‚Äôs orchestra, and then I reviewed it carefully by comparing it with the variety of katydid recordings at the University of Florida‚Äôs Entomology Department.

If you want to talk about insect songs (and why wouldn‚Äôt you?) it‚Äôs good to have the right vocabulary. There‚Äôs a list of ways to categorize and identify insect sounds on the Songs of Insects site, including chirp, trill, lisp, zit, tsip, lispy trill and rattle.

Listen to the sound recording I made in my backyard on a warm, August night. What sounds do you hear?

I can identify three distinct sounds:

What type of katydid could it be?

As happens with some crickets, many of the katydid songs indicate a change in temperature.

Whatever it was that Katy did, it must have been worth repeating, over and over and over. It becomes such a background drone, like that of crickets, that often we tune it out.

Visual camouflage qualities aren‚Äôt the only way katydids and other nocturnal insects hide in plain sight. But not everyone turns a deaf ear to these songsters. Robotics researchers have experimented with attaching a special ribbon with a very low voltage to the wing of a katydid. When electricity is on, the ribbon causes a change in the katydid‚Äôs stridulations, affecting the frequency and potentially controlling the message the insect sends. This might pose ethical questions about intruding on the natural soundscape. The researchers‚Äô results, published in 2013, conclude, ‚ÄúThis configuration can be used as part of a broader application of using singing insects to harness their acoustic power to produce and propagate machine-induced messages into the acoustic environment.‚Äù

Not to be paranoid, but I‚Äôm a little disturbed to learn that katydid songs could be used for all kinds of weird and twisted purposes as well as maybe some benevolent, humanitarian ones. Knowing this is possible just makes me even more appreciative of hearing natural sounds by the original, unaltered musicians in our midst.