Keegan’s Garden Is A Sanctuary From Daily Stresses 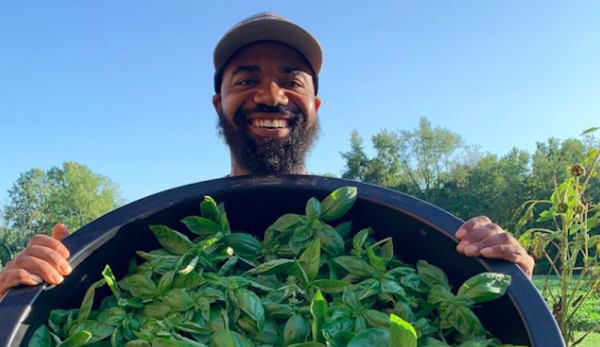 “Growing up on the island of Trinidad, I recall harvesting cassava, bananas and cocoa with my great grandfather,” says Keegan Clifford, a vegetable gardener who currently presides over 13 raised beds in Middletown, Maryland, known simply as Keegan’s Garden on social media

“Gardening has always been a part of my life for as long as I could remember.”

Tapping into the region’s fertile soil, Clifford’s lot has proved to be a bountiful ground for an array of produce that’s headed up by brassicas, root veg and legumes. And he’s successfully transformed his garden into a sanctuary to soothe the demands of a long haul 200 mile work commute.

We spoke to Clifford about the dynamics of raised beds and navigating first and last frost dates. We also got a recommendation for mixing roasted potatoes with basil pesto.

Gardening as a Stress Reducer

After moving from Trinidad to the United States, Clifford says he originally started gardening as a way to alleviate the rigors of a 200 mile work commute.

“I saw a friendâ€™s picture of her garden on Facebook and a little light went off,” he says. “It was almost like, ‘You should try that.'”

Read more: Are you ready to try gardening your front yard?

“Maryland has a deep agricultural history since it was founded,” explains Clifford. “The soil here is very fertile, and Iâ€™ve experienced the benefits prior to transitioning to a raised bed system.”

Clifford adds that while he’s had to navigate tricky first and last frost dates, he’s managed to “grow a wide variety of brassicas, root crops and legumes.” Extending the season of Keegan’s Garden into February, he says he focuses on “crops that are not only frost tolerant but crops that are winter hardy like spinach, arugula, kale and carrots.”

When it comes to the most productive crops of the last year, Clifford picks basil, beets, peppers and potatoes as being star performers.

“I enjoy roasting potatoes, making a vegan basil pesto, mixing it together and then adding some chopped cherry hot peppers to it,” he recommends.

“For someone just getting into gardening with raised beds, Iâ€™d say have a plan,” advises Clifford when asked what tips he’d pass on to someone contemplating trying raised bed gardening at home.

“In my opinionâ€”and it depends on the size of your garden â€”raised beds can be quite expensive at first,” he says. “Every spring, be sure to add a fresh layer of compost prior to planting, and test your soil before adding fertilizers.”

Read more: Check out how to make a wicking tub garden with this video and tutorial.

Gaining New Experiences in the Garden

“Iâ€™ve been gardening for a few years now, and Iâ€™m still learning,” reflects Clifford of his journey so far. “I still make mistakes and I still have fails. Each gardening season is different. I get to try new crops and experience something I didnâ€™t experience in the years before.

“When it comes to produce, I like nurturing a little seedling into a strong healthy plant that produces something beautiful which I can share with someone.”