Keep Your Chickens (And You) Free Of Salmonella

When raising chickens, it's always important to stay aware of salmonella risks. Here are some tips to help your backyard flock stay clear of an outbreak. 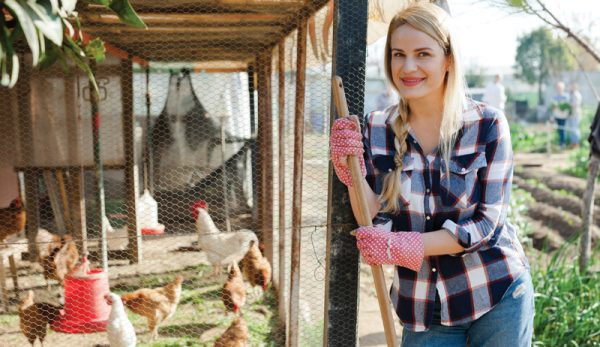 Bacteria causing food-borne illnesses have plagued humankind for centuries. They have been the driving force behind many of the regulations that are in place when it comes to the handling, preparation and selling of food.

Salmonella is just one of the bacterial organisms that has been responsible for human illness from foods we ingest.

In the United States, the Center for Disease Control and Prevention has reports indicating increases in the popularity of backyard poultry flocks has been associated with increases in live-poultry associated salmonella outbreaks.

Looking at data from the years 2000 to 2018, there were 76 outbreaks of salmonella linked to backyard chickens. Within these, there were a total of 5,128 illnesses, 950 hospitalization and 7 deaths from salmonella.

In particular, the highest numbers of outbreaks were in 2016 and 2017.

So where does salmonella come from with chickens? It can live within the birds’ gastrointestinal system and harbor there for years. Salmonella then passes out from the bird in its feces and can spread to other locations.

The bacteria can get on their feet and feathers and in their mouths. It can also be present on or in their eggs.

Feces of an infected bird can easily soil objects that the bird has been around, such as bedding, perches and nest boxes. A person can also act to spread the disease by getting the bacterium on their hands, shoes, clothing or farming equipment.

If this person is moving from one flock to another, they can spread the disease through these contaminated objects.

A bird will contract it from another individual through one of two routes: either horizontal or vertical transmission.

This means that the organism transmits from one bird to another bird through oral ingestion of products from the infected or by inhalation by the uninfected bird. Dust particles from tainted feces or feathers are the source for inhalation of the organism.

This is the other route through which a bird can become infected with salmonella. It occurs when the bird contracts it from its parent. If the parent bird has it in their reproductive system, it can transmit to the young bird through the ovum or sperm.

What’s the risk of contracting salmonella from a backyard chicken flock?

How Humans Get It

Humans contract the organism by oral ingestion of contaminated products. Yes, this means that if you get bird poop in your mouth, you could contract the disease.

Most people aren‚Äôt outside purposefully ingesting chicken feces. However, it could happen with young kids who don‚Äôt know any better and will put inappropriate objects in their mouth.

But human infection more commonly occurs through contacting items that got contaminated.

One well-known route is through simply forgetting to wash one‚Äôs hands. For example, if a bird has salmonella and a backyard farmer goes to clean the coup or perches and fails to wash their hands before ingesting a bite of food, they may inadvertently have some bacteria on their hands.

This could then transfer to the food item they next place in their hands. Then when they go to take a bite of that food item, they could get it into their mouth.

An interesting fact is that just because a chicken has salmonella doesn‚Äôt mean that it will always be sickened by it themselves. Sometimes it is simply a carrier of the organism.

Have you ever heard of Typhoid Mary? She was a cook back in the 1800s who was a healthy carrier of the bacterium Salmonella typhi. She inadvertently spread the organism, causing illness and even death in some people. However, she herself was not ill by this organism.

This same situation can happen in chickens.

Illness from salmonella in chickens depends upon numerous factors, including:

If salmonella sickens a chicken, it may show nonspecific signs such as lethargy, weakness, anorexia, weight loss and reduced egg production.

It might also have loose, yellow-colored droppings, and its combs and wattles may turn a purple color. These signs can be nonspecific, however. Therefore, testing a bird for salmonella is necessary to obtain a diagnosis.

Contact a veterinarian achieve a diagnosis in a bird. Testing may involve performing cultures or blood tests.

When people become infected with this bacterium, they may experience fever, chills, diarrhea, cramping and nausea. Sometimes signs like this are self-limiting and will resolve as an individual‚Äôs immune system kicks in.

Other times, they won‚Äôt resolve and can lead to serious and life-threatening illness in humans. The individuals who are most at risk for having severe problems from the bacteria include children younger than 5, adults older than 65 and immunocompromised people.

The CDC recommends that a physician check out anyone suspicious of having contracted the disease. Guidelines state that for children, if there has been diarrhea for greater than 24 hours, vomiting for more than 12 to 24 hours, a fever more than 102 degrees Fahrenheit, dehydration or bloody stools that individual should be checked out by a doctor.

For the average healthy adult, signs such as diarrhea or vomiting for more than 48 hours, a fever greater than 102 degrees or dehydration could necessitate a visit to a doctor.

Here are 10 tips for deep-cleaning your chicken coop.

Treatment of salmonella in chickens is somewhat of a controversial topic. Although antibiotics are considered the standard route to resolve bacterial infections, they may not always be the best thing for treatment.

Because chickens can be carriers of the bacteria, they may not be able to clear the organism 100 percent with antibiotics. This could then lead to the development of bacterial resistance.

This means the focus is more on supportive care measures for birds ill from salmonella. Treatments can include fluid support, nutritional support, probiotics and gastrointestinal support.

Antibiotics may be necessary at times. But it‚Äôs important to allow a veterinarian to make this call so that other issues do not arise.

People who have contracted salmonella will also likely require supportive care in the same way chickens receive it when they are ill from the bacterium.

Antibiotics may or may not be necessary for humans with salmonella infections. However, just as mentioned with the chickens, it‚Äôs up to a doctor to determine who is in need of antibiotics and who is not.

Although all of this may sound alarming, it‚Äôs not meant to scare people away from chicken keeping. Rather, having knowledge of what can go wrong empowers a backyard farmer to avoid problems and enjoy a more fulfilling experience with their chickens.

First and foremost, in order for the chicken farmer to keep themselves and their families safe, it is important that good hygiene be followed. After handling your chickens or any of their items, make sure to wash your hands thoroughly. Use soap and water,¬Ýlathering the soap up well.

Rub it between the fingers, along the palms and backs of the hands, up the wrists and to about mid-way on the forearm. Rinse the soap well, and dry your hands thoroughly before touching food items.

If soap is not available, use hand sanitizer in a similar fashion after rinsing any particulate matter off of hands with water. Instruct children how to wash their hands and monitor them to make sure they are doing it correctly.

Other practices to help reduce the chances of salmonella contraction include wearing boots or clothing specific for use only when working with your birds and not taking these items indoors.

Try to avoid allowing backyard chickens in the house. They could track unwanted bacteria indoors or poop on something inside, leaving behind a possibly contaminated item.

Although it may be difficult to resist, avoid kissing your pet birds or having them near your face. Yes, they are cute, but contracting salmonella is not!

You can also take measures to reduce contamination of eggs with salmonella.

First, try to pick up and remove eggs quickly from the coop. The longer an egg sits in the coop, the greater the chance it has to become contaminated with feces or other items that are harboring salmonella.

Once you collect all the eggs, remove any debris from their surface with a fine sandpaper sheet or cloth. You can clean the eggs with hot water but not cold water. Cold water could draw any bacteria that are on the egg’s surface inside.

Next, refrigerate the eggs. Discard any cracked eggs, and avoid feeding eggshells back to birds, as these could have salmonella on their surface. Also, do your best to regularly clean the chicken coop and environment to keep bacteria numbers low.

Salmonella can be a frustrating organism to deal with in backyard poultry, but one should not feel powerless or overwhelmed. Knowing how to avoid and manage it within a flock can allow the urban farmer to take control and live a healthy life with their chickens.

One other way to try and reduce salmonella in your flock is to purchase birds that have been certified by the U.S. Department of Agriculture National Poultry Improvement Plan to be free of certain forms of salmonella.

This is a voluntary program where farmers can have their birds tested for certain types of salmonella to see if they are carriers. If they find positive cases, the farmer can then choose to not sell these birds and segregate them from their flock of disease-free birds.

If you purchase a bird from this route, you can feel more comfort you are unlikely to be bringing in a pathogenic form of salmonella to your flock. Find out more at www.poultryimprovement.org.

Now, although chickens are known to carry this organism, there may be something that can be done for those individuals that do harbor it. Sage, the herb known as Salvia officinalis, also used for culinary purposes, has been shown to have some effects at combating salmonella.

The addition of sage extract to the diet has been shown to reduce counts of salmonella in the liver, spleen and cecum of birds. This suggests that this could be effective in protecting salmonella-infected chickens.

The essential oils of this plant, known as alpha-thujone, camphor, 1,8-cineole and alpha-pinene, have also been shown to be effective against other human bacterial pathogens such as Staphyloccocus aureus, E. coli and Listeria monocytogenes.

Adding sage to the diet of chickens, whether chopped, dried or in the form of the essential oil added to the water, may be a good preventative measure to help protect them and us from this damaging salmonella bacterium.

This article originally appeared in the May/June 2020 issue of Chickens¬Ýmagazine.