Your chickens will be safe and sound with coop fencing held together by fence staples. 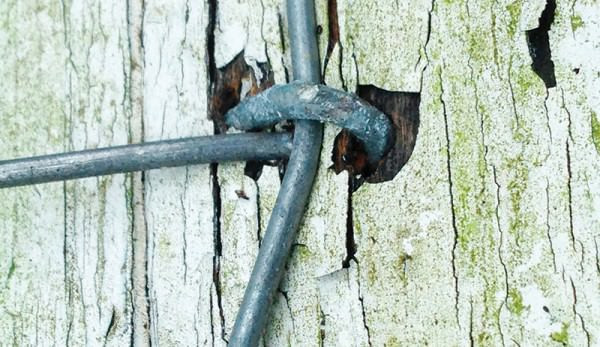 Home-improvement stores carry fence staples. Theyâ€™ll be in a 1-pound box next to the nails and screws; all three together are known as fasteners. Fence staples are curved like the letter U or V, and each end is pointed like a nail. They come in different sizes, but I recommend 3/4-inch staples for your coop fencingâ€”any smaller of a staple wonâ€™t bite into the wood deep enough to hold the fencing against the pull of a determined predator. Galvanized staples are best if theyâ€™re available, as they are coated with a gray layer of zinc that keeps the underlying steel from rusting when used outdoors.

Fencing staples are typically hammered in, but if youâ€™re not handy with a hammer, hold the staple in place with needle-nose pliers until it bites the wood. Space one staple about every 8 to 12 inches. An easy way to measure is to put one staple about every handspan, which is the distance from tip of your thumb to the tip of your little finger on an outstretched hand. No need for a tape measure. Make it easy on yourself.

You would think that the two pointed ends of a staple are parallel, but theyâ€™re not. Theyâ€™re splayed in slightly different directions, which makes the staple harder to pull out of the wood if an animal is putting pressure on the fencing or if a tree or branch falls on it. That splay also makes it a bit more difficult to drive the staple after you get it started, so donâ€™t feel bad if your first dozen staples donâ€™t go straight inâ€”theyâ€™ll probably go in at an angle, but thatâ€™s fine. As long as you can tug on the fence and the staple holds it in place, call it good. This isnâ€™t a contest for straightness.

About every fourth one I drive goes off to one side, but as long as itâ€™s biting the wood well, I go on to the next one. Just keep driving them; youâ€™ll get better with experience. If youâ€™re anything like me, youâ€™ll perfect your technique just about the time you put the last staples in the last post.