Kick Back: Porches Are Covered

Porches are must for homes across the U.S., but particularly for southern homes. They serve many functions: welcoming space for visitors, respite for homeowners, entertainment space, house transition area and pet perch to name a few. 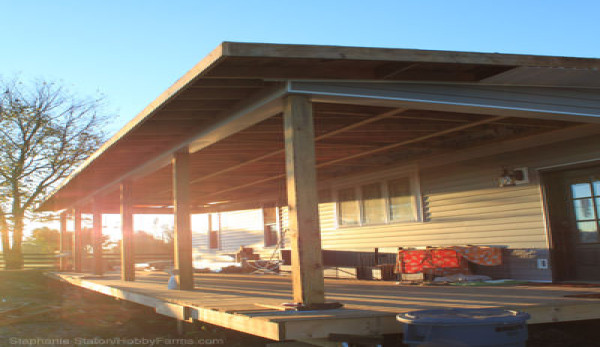 Porches are must for homes across the U.S., but particularly for southern homes. They serve many functions: welcoming space for visitors, respite for homeowners, entertainment space, house transition area and pet perch to name a few.

No matter which family memberâ€™s house we frequented as kids, there was always one thing we could count on for a summer or fall evening: sitting on the porch as the sun retreated below the horizon. From my grandparentsâ€™ small ranch home to my auntâ€™s two-story split-level with a walkout basement, each had a porch and patio that provided and outdoor living room where kids could be kids while the adults kicked back to cool their heels.

Itâ€™s this upbringing, as well as a desire to pay homage to these utilitarian feats of beauty, that made it imperative to build large porches in the front and back sides of our farmhouse. And when I say big, I mean big!

The front and back porches run nearly the entire span of the house, at 40 feet and 50 feet respectively. Their massive sizes meant we would need to add plenty of support with concrete footersâ€”fewer were needed in front because we worked with the existing stone footers, but the extended size still required the digging and pouring of four additional footers.

Having plenty of experience with building floor joists, the massive platforms came together rather quickly in the framing stages, but slowed as we began to install the floor boards.

Having seen several tutorials online and on television, we knew we wanted to hide the screws for the floor boards rather than screwing directly through the tops. We tried a couple different tools designed to help drive the screws into the sides of the boards at an angle, but found them to be difficult and cumbersome. While not as fast as face screwing the planks, we (and by “we,â€ť I mean my dad) happened upon a tool that uses a hidden deck fastening system that sped the process. It did this by not only enabling you to put screws in both sides of the deck board without moving it but also by automatically spacing the boardsâ€”another instance where a little research and patience resulted in much improved results!

When raising the roofs on these portly porches, we put a lot of consideration and mathematical calculations into their designs. To enhance the aesthetics on the front, we decided to pitch the porch roof in line with the house. Unable to agree on the size of the pitch on paper, my husband tacked some boards to the exterior for a better visual. When we had them about where we wanted them, he took measurements then calculated the proportions so that it was an accurately scaled down version. (Sometimes, it just helps to see it in application so donâ€™t be afraid to test things out before settling on a design.)

With many of our helpers unavailable to lend their hands, my husband moved forward with the porch installation on his own and got a rough frame in place for the front porch. When my parents came by to help the following weekend, there was a good amount of work done but much more to complete, so my father stepped into the role of designated cutter while hubby moved forward with the framing.

Unfortunately, while my mother and I worked inside, the world (or porch as it may be more accurately put) came crashing downâ€”with my husband on it! Turns out, he had put off installing the hangers, assuming the nailed-together joists could hold his weight until he got around to installing These need to be installed before adding more weight to the structure in the form of sheeting and metal.

The section of porch rafters he was standing on pulled away from the house, taking him with it. By some miracle, he walked away from the 14-foot tumble, but not without a lot of sore muscles and bruises, including some to his ego. Undeterred, he picked up the pieces of his porch mishap and started again. This time, he reinforced every joist with hangers (just as we did with the flooring) and used screws and nails to secure the faceplate and joists as he went.

With a single slope and a lot of helpers around to raise the back roof (not to mention a hard-learned lesson), the framing and roofing on this porch went much faster, and weâ€™re enjoying the ability to stay a little drier as the rains yet again do their best to dampen our endeavors.

Stephanie Staton is a freelance writer who burns the midnight oil to meet deadlines between homeschooling her son and chasing her two horse-poop enthusiastic dogs around the farm. She and her family split their time living on the family farm and in an RV that moves with her husbandâ€™s work.