Feeding animals out of the garden during summer is a great way to save a little money on feed, as well as provide the health benefits of natural homegrown fruits and veggies. For our little farm hands, though, it can also mean inadvertently making the animals sick. 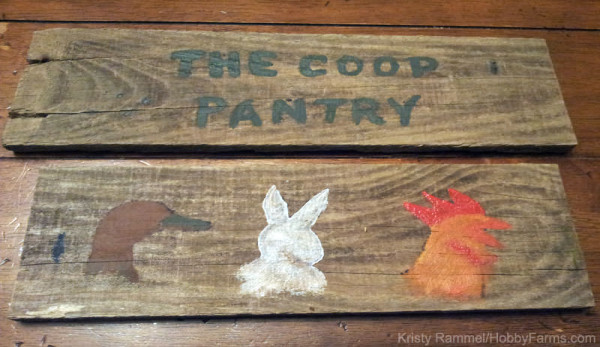 Feeding animals out of the garden during summer is a great way to save a little money on feed, as well as provide the health benefits of natural homegrown fruits and veggies. For our little farm hands, though, it can also mean inadvertently making the animals sick. Teaching aÂ 4-year-old that not all green things can be fed to rabbits is not an easy task. After all, they were just helping Momma, right?

To teach my “helpersâ€ť what foods can and cannot be fed to the animals, I explored creating a “rabbit bedâ€ť in the garden. I considered this viable option at first, but eventually ended up nixing the idea because I simply donâ€™t have the garden space to dedicate just to rabbits/chickens/goats. While I do have a salad bed and most of those veggies are perfectly safe for the animals, I could just imagine little Jack-Jack cutting it all down one day because he thought the animals were hungry! (Actually, he would probably just open the garden gate and shoo all the animals in for an all you can eat buffet!)

As a compromise of sorts, Jack-Jack and I are currently potting animal-friendly foods to eventually be transplanted around the chicken yard. (We have to start everything in pots because my feathered friends have a keen eye for spotting seed hundreds of feet away!) A bit of chicken wire over the pots is giving our plants a fighting chance while my husband works on a child-accessible but not chicken-accessible garden patch.

The benefits of having this type of set up actually in the coop area are simple:

But even after starting what weâ€™re dubbing the “coop pantry,â€ť the fact still remains that I will have fruits and veggies in the main garden that we will be feeding the animals, and those foods needed to be easily identifiable as edible or nonedible livestock foods. While cutting pallet wood for my garden markers, I realized I could easily stamp, paint or stencil a little animal head behind the plant name.

To keep things simple, if there is an animal head next to the plant name, that animal can eat it. If not, they canâ€™t! (I thought about tiny rabbit heads surrounded by a big red circle with a line through it for rabbit no-noâ€™s, but why complicate it that much?) I purposely did not put any animal heads on the herb garden signs because, well, thatâ€™d be like giving a 4-year-old access to the medicine cabinet! Itâ€™s just best if they view all the herbs as unacceptable animal foodâ€”at least for now!

During my stint of creativity, I also painted a sign for my garden gate. No words, just several animal heads with big olâ€™ “NOâ€ť symbols around each one! I realize the animals canâ€™t read, but neither does my 4-year-old. But maybe, just maybe, this big, glaring, tacky sign will remind him to close the garden gate. Iâ€™d tell you where my bet lies, but I donâ€™t want to jinx myself!