Hey, guess what? I’m going to be a daddy again in two weeks! My girlfriend, Katy the Alpine, is having my babies. 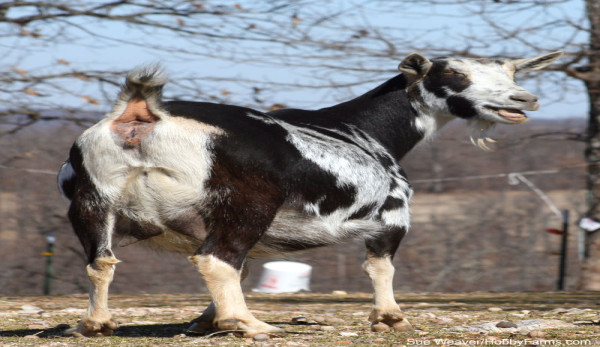 Hey, guess what? I’m going to be a daddy again in two weeks! My girlfriend, Katy the Alpine, is having my babies. I hope they’re as cute as Ranger and Rapunzel, our kids from last year. We’re getting ready for the big event!

Katy is due on March 24, although five days before and five days after a doe’s due date is within a normal gestation. It takes five months for a mama goat to make babies. Katy didn’t need anything out of the ordinary for the first three and a half months of her pregnancy, especially because she’s really fat and didn’t need extra feed. (Don’t tell her I said she’s a tubber—she’ll bite my ears!) Then, six weeks ago her pre-kidding preparation began.

First she got a shot of Bo-Se. Bo-Se is an injectable prescription selenium and vitamin D supplement that pregnant mama goats need if they live where the soil is selenium deficient, like it is here in the Arkansas Ozarks. Selenium is an essential trace mineral. Your cooperative extension agent can tell you if there’s a selenium deficiency problem where you live. Mammals need selenium to reproduce, give milk, give birth without problems and have properly functioning muscles.  Kids and lambs from does and ewes with selenium deficiencies are sometimes born with white muscle disease, also called nutritional muscular dystrophy. They have crooked legs or are too weak to stand or nurse. We all get Bo-Se shots twice a year, but it’s especially important before our mama goats or sheep give birth.

The same day, Katy got a CD/T booster shot. CD/T vaccinations help protect us against clostridium perfringins type C and D (overeating disease) and clostridium tetani (tetanus). Immunity will pass from Katy to her kids in her first milk, a thick, creamy, antibody-rich substance called colostrum. Then they’ll be protected for about six weeks, until their own immune systems mature.

Then Katy started getting extra feed. Because she’s fat, Mom doles it out carefully, making sure Katy gets enough nutrients without piling on a lot of extra weight. Calcium is very important for pregnant moms, so Katy eats dehydrated alfalfa hay to add additional calcium to her diet. Now, she gets grain, too, but not as much as most does and ewes would get. Obese pregnant mamas who eat too much can grow great big kids and lambs that are hard to deliver. They’re also prone to a condition called pregnancy toxemia. A tummy full of babies takes up so much space in a big, fat doe or ewe that there’s not enough room for her to pack enough nutritious feed into her rumen and she becomes energy deficient. Substances called ketones build up in her body and she gets weak and stops eating. Our friend Kes, the Boer goat, had pregnancy toxemia when she was young and she almost died, so Mom is careful about how much and what Katy eats.

Katy also gets a homeopathic remedy called caulophyllum in her drinking water three times a week and a big fistful of blackberry leaves in her feed tub every day. Mom also gives her five berry-flavored Tums once a day; some experts say Tums help provide useable calcium; some say it doesn’t, but Katy loves them. Mom thinks, what can it hurt?

Katy has access to goat minerals all the time, and Dad gave her a copper bolus last week. Mom dewormed her, and she’ll get another round of dewormer after her babies arrive. (I’ll talk about that in another blog after my kids are born.)

Dad trimmed Katy’s hooves a few weeks ago and will do it again next week. Then we’ll all sit back and wait. If you want to follow Katy’s pregnancy, check out her Facebook page. Otherwise, I’ll tell you about her delivery and my new babies after they arrive. Stay tuned!