Kikos can thrive in rough conditions while producing meat efficiently. They cross well with Boers. 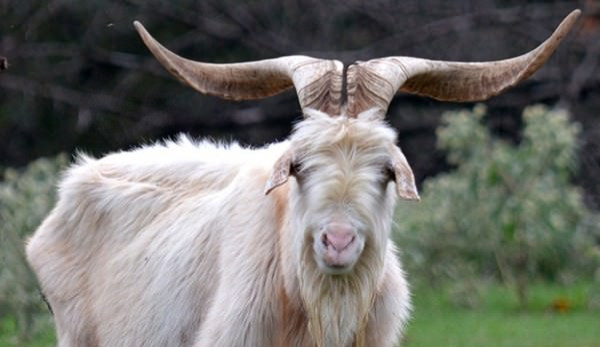 Use: The fast-growing, efficient Kikos are ideal for low-input goat farming. They shine under rough-country conditions.

History: Kikos hail from New Zealand where their name means “meat.” Kiko development began in the early 1970s when a group of ranchers united to form The Goatex Group LLC. They collected and bred thousands of feral goats, reserving only the fastest maturing, meatiest, and most disease- and parasite-resistant goats from each generation to use as breeding stock, sending the balance to slaughter. They provided their herds with no supplementary feed, no shelter, no hoof trimming or vet care and no assistance at kidding. Only the toughest survived.

Conformation: Kikos have straight profiles; medium-length ears; and magnificent, up- and out-sweeping, spiraling horns; wide, strong frames with moderate bone size; and compact, muscular bodies. Most American Kikos are white, but Kikos come in a wide variety of colors. They have supple skin and short- to medium-length coats.

Special Considerations/Notes: Does are prolific, protective and require little or no assistance when kidding. Kiko kids are small at birth, but grow quickly; they are alert and active within minutes of being born. Some of the fastest maturing, most efficient meat goats in the world are created by crossing Boer and Kiko goats. A case in point: Crossbred kids created as part of The Goatex Group’s experiments reached slaughter weight two months faster than either full-blooded breed. The American Kiko Goat Association maintains a herdbook for Genemaster goats, the crossbreed of Boer and Kiko goats. First generation crosses are created by breeding full-blood Kikos to full-blood Boer goats. The best from that generation are mated with fullblood Boers to create one-quarter Kiko and three-quarter Boer offspring. These animals are crossed with first generation Kiko and Boer crosses to create the three-eighths Kiko and five-eighths Boer Genemaster goat. The International Kiko Goat Association registers three Boer and Kiko crossbreeds: the BoKi (half Kiko, half Boer), the American MeatMaker (half Boki, half Kiko) and the International MeatMaker (half Boki, half Boer) goat.