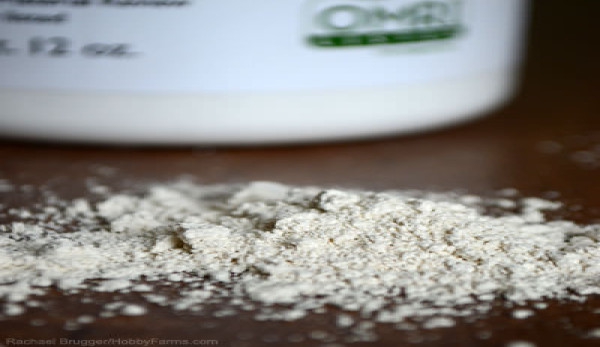 Does diatomaceous earth really work on killing fleas and worms or parasites, and are there any harmful aspects to fowl or livestock? â€”MaryAnn Lozano

Uzzi and I didnâ€™t know anything about diatomaceous earth, MaryAnn, so we looked it up on the computer. We decided weâ€™d only look at university and government websites. This is what we learned.

Diatomaceous (pronounced dia-a-toe-may-shus) earth, also called DE, is naturally occurring rock made from the skeletons of fossilized diatoms, a teensy, hard-shelled aquatic organism. Over millions of years, diatom skeletons accumulated in the sediment of ancient oceans, rivers and lakes. What we know as diatomaceous earth is mined from these deposits.

Diatom skeletons are made of a natural substance called silica. Other forms of silica include sand, quartz, feldspar, mica, asbestos and natural glass. Silica is so common in nature that it makes up more than a quarter of the earthâ€™s crust by weight. Youâ€™ll never find silica by itself, though. Most often youâ€™ll find it as aÂ component in silicon dioxide, which is made through a reaction of silica with water and oxygen. Diatomaceous earth comes in several grades, with and without additives, and is usually sold as a fine dust.

According to the National Pesticide Information Center, diatomaceous earth was first sold as a natural pesticide in 1960 as a natural way to battleÂ insects and mites. Nowadays, more than 150 diatomaceous earth pesticides are available to to control pests in buildings, on farms, in gardens, and on pets,Â poultry and livestock. There are even more non-pesticide products containing diatomaceous earth, too. Itâ€™s used in foods, beverages, medicines, skin care products, toothpastes, paints and water filters.

Diatomaceous earth packs a double whammy. It works by absorbing the oils and fats from insectsâ€™ exoskeletons, causing them to dry out. Itâ€™s also abrasive, so if insects eat it, it lacerates their insides. Either way, they die and wonâ€™t bother you anymore.

Diatomaceous earth is safe for the environment, and unlike synthetic pesticides it wonâ€™t break down in the sun or heat. As long as you keep it dry, it keeps working and working.

Food-grade diatomaceous earth is safe to eat. Itâ€™s sometimes sold as “fossil shell flour,â€ť and allowable in or on USDA approved organic foods. The diatomaceous earth added to pesticides and used in swimming pool filters isnâ€™t poisonous either, though substances added to them may be another story. Itâ€™s never wise to breathe these products or get them in your eyes, so wear goggles, a dust mask and gloves when you use them. The NPIC says that food-grade diatomaceous earth is safe to eat because very little is absorbed into the body and that the remaining amount is quickly excreted. Small amounts of silica are already present in body tissues. In fact, urine normally contains silicon dioxide.

According to the university and government resources Uzzi and I looked at, diatomaceous earth is a safe and very effective pesticide used as an external dust on birds and animals or in their quarters. However, the jury is still out on its effectiveness as an internal deworming agent. Few studies have been conducted to prove or disprove its efficiency and the ones that have been published tend to contradict one another. The bottom line is that because itâ€™s safe to ingest, it canâ€™t hurt to try diatomaceous earth as a livestock wormer. But if you do, monitor worm levels by taking fecal samples to your vet every few months so he can analyze them. Then if the diatomaceous earth isnâ€™t working, youâ€™ll know, and you can switch to an alternative dewormer.