Produce? Yes, with some exceptions. Meat and fish? Sure, but only if it's cooked. There's also a chart about the scraps to avoid. 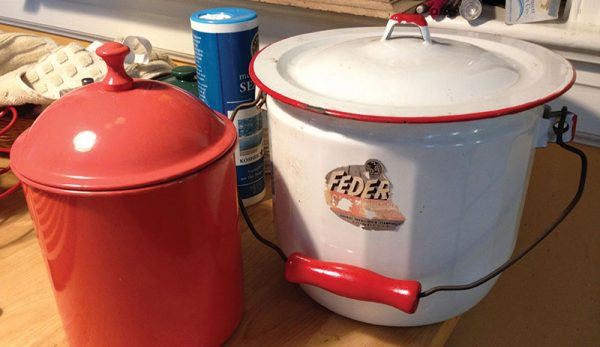 It‚Äôs never my intention to embarrass my wife when we go out to dinner. But she sometimes cringes when I ask the waiter for a to-go box so I can feed the leftovers to our chickens. The staff is always happy to hear that the food isn‚Äôt going to waste, but my wife pretends she doesn‚Äôt know me.

Too few restaurants compost or give their food waste to farmers, which contributes to the average citizen generating 20 pounds of food waste per month, according to the U.S. Department of Agriculture. That adds up to about 240 pounds of food waste per person in a year. Citywide, that means food waste from homes, restaurants and institutions comprises about 13 percent of municipal trash going to the landfill. That probably costs your city about $40 a ton or more, and it‚Äôs hauled by garbage trucks that get as little as 3 miles per gallon. (That‚Äôs not a typo.) So every time you throw food away, you put upward pressure on your own tax bill.

There are also environmental advantages to letting your hens eat these food scraps. If these scraps go to a landfill, they slowly decompose in a way that turns them into methane gas. The methane will escape into the atmosphere, where it‚Äôs 25 times worse for promoting climate disruption than an equal amount of CO2 coming from your car exhaust or those garbage trucks.

If you dispose of food scraps down the drain, with or without a garbage disposal, things aren‚Äôt much better. When those scraps of food waste get to your municipality‚Äôs water treatment plant, the staff spends taxpayer money getting all that organic matter out of the water so it doesn‚Äôt kill fish downstream.

If my two-person household generates almost 500 pounds of food waste per year, then I estimate that I should be able to give a third of that to my chickens‚Äîabout 160 pounds (much of that weight is water, but still). I don‚Äôt have hard numbers, but I believe our modest efforts at using food waste from our kitchen, our meals out and scraps from our neighbors might reduce our chicken feed bill as much as 15 percent.

Clearly, feeding some food waste to backyard chickens is a great way to fight climate disruption, reduce landfill costs, cut water treatment costs and decrease our chicken feed bill, too. Finding a way to share some of that food waste with backyard chickens makes (dollars and) sense. So here are some tips on how you can reduce your contribution to food waste.

We already had a container for food scraps that go to our compost bins. A few years back, we set up a second one on the kitchen counter for scraps that would please the chickens. The original compost container still gets things that the chickens won‚Äôt or shouldn‚Äôt eat, such as coffee grounds, paper towels, citrus peels, avocado skins (which are toxic to chickens) and anything moldy or spoiled.

Before you throw scraps in, put a folded paper towel in the bottoms of both containers to absorb moisture and make it easier to pop out the contents without having to scrape them out. Then, start saving your scraps.

Being omnivores (able to digest plant and animals foods), chickens like almost all the scraps of vegetables and fruit that we give them, with the important exceptions of uncooked potato skins and avocados, which are reportedly toxic. They will attack any leftover corn on the cob, apple cores, overripe cucumbers and carrot tops. Occasionally, at our neighborhood grocery, I divert a box of vegetable scraps from the trash receptacle, and the chickens plow through the scraps right away.

We sometimes freeze stale bread to add to soups, but we also give bread scraps to our chickens. They devour bread, leftover rice, old pasta, stale crackers and cereal crumbs from the bottoms of boxes. Anything flaky or crunchy from grains will suit them.

Chickens are not vegetarians. They like meat; I mean they like meat the way a good Southern boy, such as myself, needs his daily dose of pork products. Chickens really like cooked meat, including gristle, tendons and fat. They will pick bones clean, leaving nothing to attract vermin‚Äînothing. And because we cover the ground in our pen with wood chips, any bones quickly decompose in place, too.

We don‚Äôt feed them chicken scraps, as that seems ‚Äúweird.‚Äù We don‚Äôt want to support cannibalism for any species. (It‚Äôs also a potential for disease: Mad cow disease came from feeding cow parts to cows.)

We also don‚Äôt give them fish bones. The smell would stick around too long. That said, we do give them scraps of fish skin, lobster shells and shrimp shells, which get gobbled right up. Those shellfish are related to insects, and as you probably know, chickens love them some bugs.

If you have the bad habit of pouring cooking oil down the sink, you really should see what this stuff looks like when it congeals inside a city sewer pipe. These grotesque icebergs of fat (aka ‚Äúfatbergs‚Äù) cause nearly half of the sewer overflows in the U.S. each year. And even when the fat doesn‚Äôt congeal into a fatberg, it still has to be removed from the wastewater, and that costs taxpayer money.

Instead of pouring cooking oil or fat from bacon, burgers, steaks and pork chops (mmm ‚Ä¶ pork chops) down the drain or even putting that stuff in the trash, we pour‚Äîand scrape‚Äîour waste oils and fat into a bowl and let it set up in the fridge overnight. We then feed it to the hens the next morning. It‚Äôs like pudding for chickens, and they gobble it up fast. That‚Äôs not nearly as strange as it sounds. Many cooking oil-recycling operations turn waste oils from restaurants and food processors into livestock feed anyway.

Another tip: If you have dusty bits of pellets or grains that the chickens aren‚Äôt eating, mix them with liquid waste oils into a paste that your hens will devour.

The chickens don‚Äôt get all the bacon fat at our house, though. It‚Äôs the best thing for frying eggs sunny-side up. 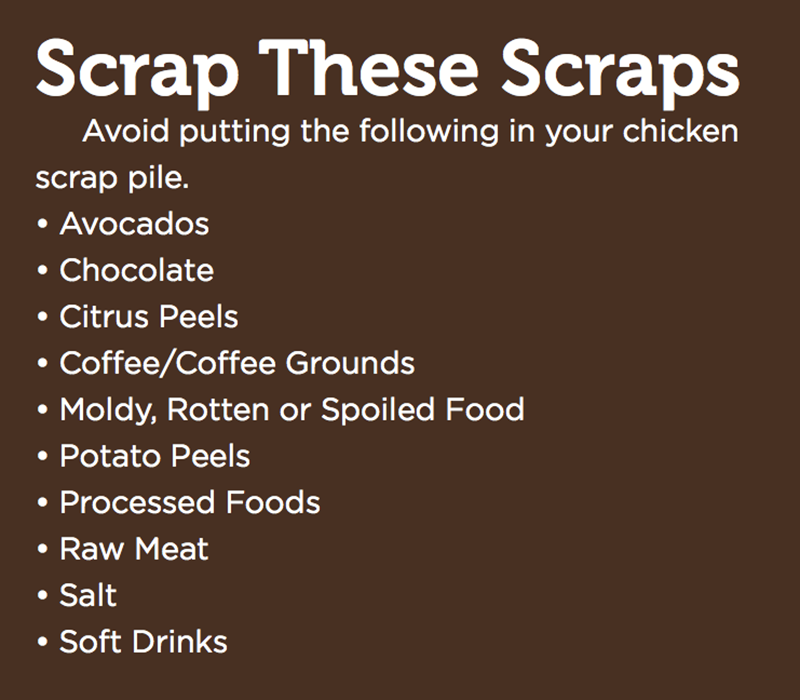 Cheese rinds and leftover milk from cereal bowls are also popular with the poultry set.

We give our hens eggshells. We smash the shells flat so they don‚Äôt resemble an egg; we don‚Äôt want to encourage egg-eating. But the calcium in the shells is valuable. When our hens are laying heavily, they wolf down the crushed eggshells. During winter, when they are laying less, they are more laissez-faire about the shells.

Essentially, we encourage reverse community-supported agriculture on our block. You might know CSA as a method for consumers to pay farmers in advance for their produce. We ask our neighbors to save their kitchen scraps‚Äîwith the exceptions noted previously‚Äîand drop them off in the run.

After fall holidays, such as Halloween and Thanksgiving, it‚Äôs party time in the coop as neighbors drop off their out-of-date ornamental squashes and pumpkins. I toss these in the pen and chop them into accessible sections. You can imagine how quickly the seeds disappear. And the flesh goes next, leaving a very thin layer of inedible pumpkin skin. I know some folks who spoil their birds by cooking the pumpkins first, but that‚Äôs not necessary.

We also gently encourage our neighbors to save their meat scraps in the fridge to share with our hens. But that program is going a lot more slowly than the reverse CSA of fruit, vegetable and pasta. That‚Äôs OK. Change comes slowly, but it does come.