Often looked at as an invasive, knapweed has historically been used as a natural medicine, treating anything from sores to digestive complaints. 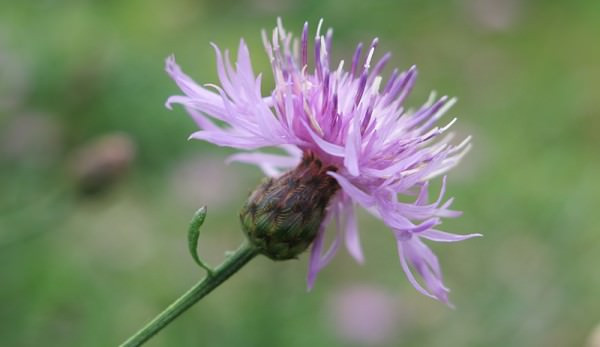 About a month ago now, my family went on vacation in Southern Ohio. It was a great chance to get away and disconnect from electronics and our busy lives. We stayed at a cabin and our days were filled with fishing, hiking and board games. At the end of our week away, the friends who loaned us their cabin came to visit and offered my daughter and me an ATV ride through a nearby park.

I‚Äôm just going to guess right now that my version of sightseeing on the back of an ATV is not the norm. As I rode along, I was constantly craning my neck to see what lies in the forest on either side of the road. I was excited to see some of the familiar plants that I had seen all week on our hikes, but every once in awhile a fluffy purple flower would come into view. Going at the high speed, I couldn‚Äôt tell what it was, but I knew that it wasn‚Äôt a plant I had met before.

After we had packed up the van to go, I had my husband drive down the same lane we had gone on the ATV. I simply couldn‚Äôt leave the area without taking a closer look at the mystery flower. When I got it home and began poring over my field guides, I discovered that I had found knapweed (Centaurea maculosa).

Going at high speeds, I had guessed that the plant could be in the thistle family. The flower looks very similar to that of our Canada thistle (Cirsium arvense). Once I looked at the plant up close, it was clear that these two plants were not related. In fact, knapweed is in the sunflower family. The plant is a biennial and loves the disturbed ground found along ditches and pastures. By now, this particular species is sporting its seed heads, but in July and August, it puts on quite a roadside show.

Knapweed is a well-known medicinal with quite a long history. It was mentioned by herbalist Nicholas Culpeper in the mid 17th century as a topical remedy for both common and cancerous sores. Both the leaves and the root have been used for eye ailments and liver disorders, though it‚Äôs most often discussed in reference to nervous system problems.

Native Americans taught the use of knapweed as a digestive. This would imply to me that there is a bitter aspect to this plant. I didn‚Äôt taste the specimen I brought home, and I‚Äôm not sure why that didn‚Äôt occur to me before it had dried up. In some countries around the world, knapweed species are referred to as an edible, but it seems that the majority of folks disagree with this. I‚Äôm going to guess that is due to a disagreeable flavor rather than any suggestion of toxicity.

I was so excited to find a new plant to get to know as part of my vacation. If you have knapweed near you, perhaps you already know its name. You may not have nice thoughts about it though, as in many areas, it is considered an invasive. Perhaps you can look at it with new eyes, as I did, even if you think you know this pretty plant. Like the thistle it resembles, there is much to benefit our health if we can only look past its undesirable weedy qualities.