This beneficial garden spider weaves webs of gold, ensnaring troublesome pests before they get to your tender crops. 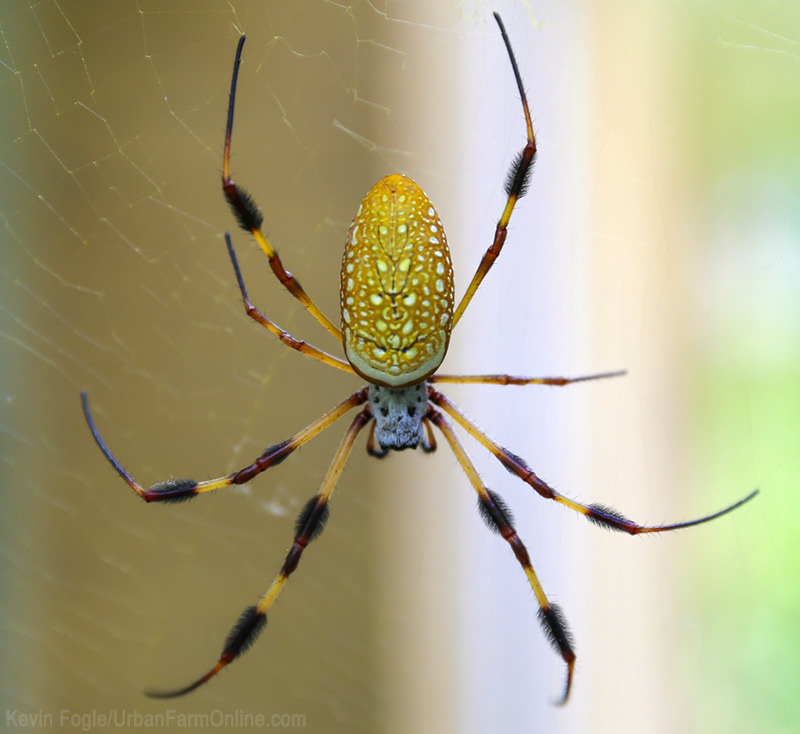 Last week, I introduced you to the black-and-yellow argiope (Argiope aurantia), perhaps better known as the black-and-yellow garden spider. As we continue to look at beneficial spiders in the yard and garden, I want to introduce you to another very large spider, the golden silk spider (Nephila clavipes), which looks similar.

Golden silk spiders are a common sight in the southeastern United States, from Florida west to Texas, and are regularly found as far north as North Carolina. Adult female golden silk spiders are very large, reaching up to several inches in diameter when leg span is included. Their cylindrical abdomens are brown to muted orange and feature a rather sporadic white or yellow pattern. Their legs have red and yellow bands with several dark fur-like tufts on them.

Adult males reach only one-quarter the size of the adult females. They have a non-descript, dull-brown body and can be found occasionally visiting the femaleâ€™s web. The size and color difference between the two genders leads many casual observers to mistakenly believe that the males are either immature golden silk spiders or spiders of an entirely different species.

The golden silk is an active garden and yard predator. It builds large strong webs in peripheral locations intended to capture flying insects of all sorts. Youâ€™ll most often see the adult females in late summer and fall. Last year, my family was fascinated by two golden silk spiders that built their webs between the house and our front hedge next to the garden. Every day we would go over and see what the spiders were up to, what they had caught in the webs and how big they had gotten. It was amazing to see the range of critters they ensnared, from grasshoppers to the annoying leaf-footed bugs that were attacking my cherry tomatoes.

Feel free to share your spider stories. I would love to hear what spiders you see around the garden!