Founder Michael Mazourek tells us his insider tips for cooking with squash and breaks down the appeal of the company's vibrant beets. 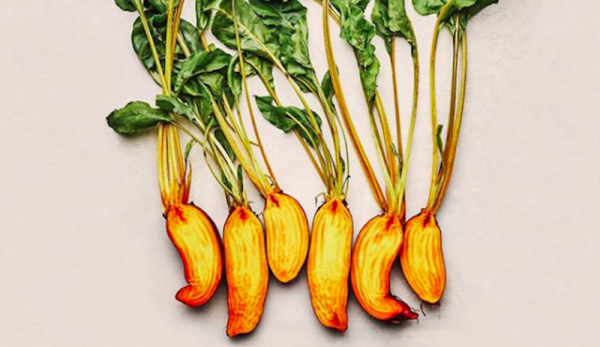 Michael Mazourek’s interest in seeds was sparked during his time as a biochemist PhD student at Cornell.

“My advisor, Molly Jahn, had started programs like the Public Seed Initiative and the Organic Seed Partnership to help create and deliver vegetable varieties to farmers that addressed unmet needs,” explains Mazourek.

“When she left Cornell to try to help in broader ways, her absence was felt in the seed community. And my farm roots led me to step up to continue the mission.”

Alongside chef Dan Barber and seedsman Matthew Goldfarb, Mazourek founded Row 7 Seeds. The venture specializes in bringing the most flavor-packed seeds to chefs and markets around the U.S.

We spoke to Mazourek about the appeal of Koginut squash and the rise of mini-Butternuts. We also got the scoop on the joys of Badger Flame beets.

Get Familiar With Miniature Butternuts

When breeder @mazlabseeds makes selections, he can often correlate color with nutrient density. The 898‚Äôs deep orange pulp, for example, indicates its high carotenoid content (and its amazing flavor, too). Look no further for your Recommended Dietary Allowance of deliciousness. ??‚Äç?: @jaksfarm #898squash

“In part because they are a convenient size for shopping and meals,” he says. “But also they got a name as a Honeynut-type squash. Like apples that are sold by variety name, this name association helped create a way for people to recognize these squash as different from other Butternuts.”

“I’m a very fidgety listener and was pulling some roots from the demo plots during Irwin Goldman‚Äôs field day presentation,” recalls Mazourek of how he came across the varietal. “I took out my pocket knife and scraped the dirt and peel away to reveal a vibrant orange with swirls of color.

“I took a bite and was so blown away I interrupted poor Irwin‚Äîwho was in the middle of his presentation‚Äîand exclaimed, ‘Irwin, have you tasted these beets? They‚Äôre like a carrot but even better.’ Irwin was very gracious and noted that indeed he had tasted his beets and would talk about them next.”

Mazourek adds that “years later Row 7 Seeds was founded. And Irwin‚Äôs Badger Flame beet was one of the few varieties in our launch.”

Read more: Check out these 5 reasons every market farmer need to grow beets.

Our favorite pumpkin pie recipe starts with the seed. The secret ingredients? Breeders, growers and chefs dedicated to co-selecting for flavor in the field and kitchen. #koginutsquash

Asked about the appeal of Koginut squash, Mazourek calls them “edible art.” He adds that Koginut squash also packs more flavor than a standard pumpkin. They also require fewer spices to pep them up when cooking fall and winter dishes.

The Secret to Roasting Squash

Wishing you all a weekend of rest and good health. Some comfort cooking inspiration, courtesy of a brilliant duo: Breeder @mazlabseeds bred the Koginut squash for maximum deliciousness and velvety texture all the way through March, and chef @suzannegoin brought it to life two ways‚Äîwith brown butter, no less. What better way to make use of the last of your storage Koginuts? ‚ÝÄ ‚ÝÄ Recipe for Roasted Robin‚Äôs Koginut Squash and Persimmon-Pomegranate Salsa is on our website‚Äîlink in bio. ‚ÝÄ ‚ÝÄ #koginutsquash

When it comes to cooking with squash for the winter months, Mazourek says he likes to “keep it simple and toast it sliced lengthwise with butter.”

He adds that it’s important to roast your squash longer and at hotter temperatures than you might be used to.

“I roast covered for 45 minutes to an hour depending on the size of my slices, until the squash is hot and steaming. Then uncover, rub the slices with a frozen stick of butter like chapstick. Roast uncovered for about another 30 minutes until super soft but not too caramelized.

Using Squash as a Serving Vessel

The idea of using a whole squash as a serving vessel has been trending on social media this fall season. If you’re looking to try out the technique at home, Mazourek advises to “use the round seed ends of your butternut squashes!” He says this part of the squash is thinner and cooks differently.

“Brown and drain some maple or herb sausage,” he recommends. “Mix with other fillings like apples for sweet maple or rice for savory herb. Then roast until the filling and mini squash bowls are done.”