The KuneKune pig is a producer of sweet, succulent meat. It is an intelligent and charming breed that makes an excellent addition to any pig lover’s menagerie. 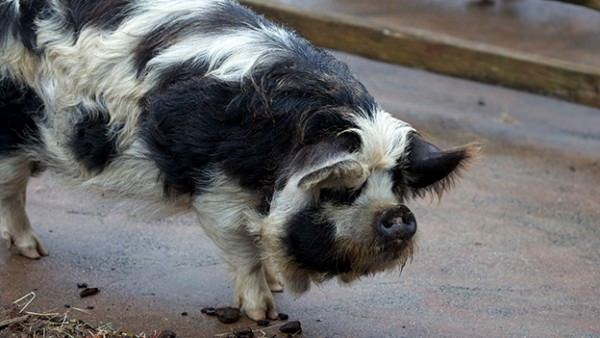 Use: The KuneKune pig is a producer of sweet, succulent meat. It is an intelligent and charming breed that makes an excellent addition to any pig lover’s menagerie.

History: The KuneKune (also spelled Kune Kune or Kune-Kune) is pronounced cooney cooney and means “plump” in Maori. This diminutive pig breed came to America from New Zealand in 1995 through a breeder in Kansas named Katie Rigby. Because pigs aren’t native to the lands down under, it’s anybody’s guess how they got there. Some speculate the breed originated in Spain while others say it’s of Chinese origin. However they got there, the Maori, New Zealand’s aboriginal people, adopted them and they thrived, but by the 1970s, their numbers were dwindling and it seemed the breed could become extinct. In 1984, a pair of wildlife park owners gathered a remnant population of 18 pigs and the New Zealand herdbook formed soon thereafter. The American KuneKune Breeders’ Assocation was established in 2006.

Conformation: The KuneKune pig breed is larger than the Vietnamese Pot-Bellied pig but smaller than commercial swine. It stands about 24 to 30 inches tall and weighs anywhere between 80 and 250 pounds. There’s a good deal of genetic diversity in the breed, but the typical KuneKune is stocky and solid with short, thick legs and a short, upturned snout. Its large ears stand or flop. The hair can be short or bristly. KuneKune pig breed colors include black, tortoiseshell, ginger and blue, with or without spots. A distinctive feature of the breed is piri piri (wattles; sometimes called tassels) on its lower jaws; some KuneKune pigs have them, others don’t.

Special Considerations/Notes: The KuneKune is a heritage pig breed with winsome looks, a sweet temperament and amazing intelligence that make it the crème de la crème of small pigs. It’s a hardy pig breed, so a stable with a thick bed of straw or a sty or arc in a field make adequate housing. KuneKunes are grazers, so they don’t tend root the way other pig breeds do. They make interesting organic lawnmowers and weed-trimmers in orchards, as they typically don’t harm trees and shrubs, and are a good option for farmers wanting to market grass-finished pork. The breed is slow-growing and late-maturing, so farmers who choose to raise them for their meat butcher them at 10 to 12 months of age.