Ladybugs To The Rescue

Save your crops from aphids and other pests by become garden BFFs with the ladybug. 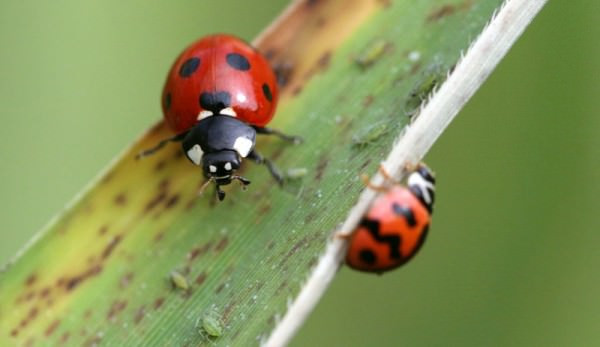 As it becomes more important for many to reduce their use of petro-chemical-based insecticides, the use of beneficial insects is becoming more widespread. One of the most effective killers of nuisance insects that suck the nutrients out of your plantsā leaves, leaving them looking sickly, is the common ladybug (Hippodamia convergens).

Unlike other beetles in the garden that often chew on leaves, ladybugs actually eat many of the pest insects that cause stress on your plants. Their favorite food is aphids, but theyāll consume other pests, such as mealybugs, spider mites, and sometimes the eggs of other pest beetles and borers. Depending upon the species of ladybug (there are about 450 in the United States and 4,000 worldwide), adult ladybugs can consume between 50 and 200 aphids per day and easily consume upwards of 5,000-plus each over the course of their lifetime.Ā A healthy ladybug, with ample food and water, can live as long as three years; most however live much shorter lives. Be mindful of the type of ladybug you select if you are purchasing them, as not all ladybugs are general feeders. Most that are commercially available, however, are general predators.

These little orange, red or yellow predators are not only effective as adults; their kids are effective aphid hunters, as well. Ladybug larvae can often be mistaken for a pest insect. These little alligator-looking insects are often black with orange markings. During their larval stage, ladybug progeny can consume up to 500 aphids during this developmental phase.

How To Attract Ladybugs

Many of the same flower and herb crops already grown by garden enthusiasts are great for attracting ladybugs and other beneficial insects. Herbs and medicinal plants, such as yarrow, fennel, mint and parsley, are great at attracting ladybugs. Ornamental and colorful flowers, such as daisies, zinnias, coreopsis and sunflowers will get the job done, as well.

Even weed species get in on the act. Think twice about pulling Queen Anneās lace and knotweed in your landscape, as these are havens for beneficial insect species. Weed species in your lawn, such as clover and dandelions, are also good sources for attracting beneficials and have the added benefit of supplying food for pollinators.

Many people have undoubtedly found some variety of ladybugs congregating around southern- or western-facing windows at some point in the year. This is because ladybugs are attracted to illuminated surfaces. Garden adornments, such as gazing globes and other reflective items, can also attract ladybugs to your garden, though they will not stay long if there is no food for them.

Make sure that they have a drinking water source, as well. Ladybugs, like every other living thing, need water to drink. A birdbath, fountain or other water feature will help to attract and retain ladybugs to your garden.

A Word of Caution

Another consideration is that ladybugs, once released, will likely not stay in your garden. If they are released next to areas infested with aphids, you can expect them to feed for a while, but once they have done their job, they will move on. For this reason the use of ladybugs as a pest control option is far more effective for indoor growing areas, hydroponic setups and even for insect control on your houseplants.

If you do not wish to release all of your ladybugs at once, fortunately you can put the others in cold storage for up to three months, releasing only what you need at a time. Plan on releasing about 1,500 at a time for a small garden. Keep them in a refrigerator or cold area at about 35 to 40 degrees F to keep them alive. Donāt let them freeze.

As ladybugs released outside, are not prone to stay put for long, it is advisable to try to attract and retain other beneficial insects into your garden. Many of the same sources where you can purchase ladybugs, either online or at your local garden center will carry beneficial predators and parasites, such as lacewings, pirate bugs, predatory wasps, predatory mites and even praying mantids. These tend to stick around longer than ladybugs, though they are often more expensive than ladybugs.

The best rule of thumb, however, is to cultivate diversity in the garden that attracts ladybugs and other kinds of beneficials naturally without having to purchase them.

Chris Bond is a professional horticulturist in Maine and has raised chickens since 2011.Ā