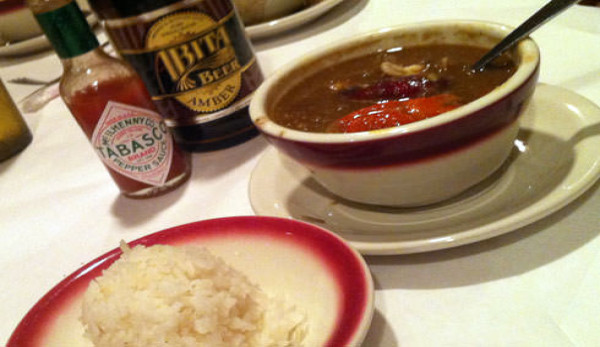 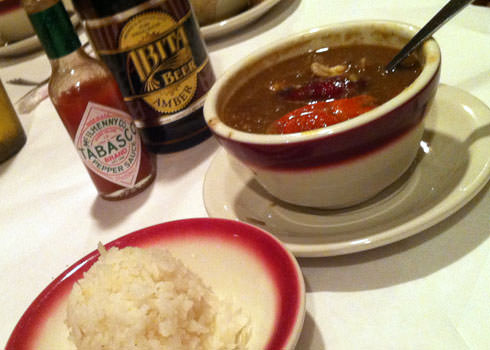 Time warp (or better, weather warp): Friday night, I cook the first delicate Swiss chard of the season, which had been carefully wintered over under a hoop house at a friend’s farm close to home. Wednesday, I pick the last chard of the season in another friend’s garden in Lafayette, La., with the scent of jasmine and gardenias all around. Wow. And the chard was the least of it.

Where to begin? The food traditions of Cajun country are easy to find. Eating locally and seasonally seems natural there because the growing season is 12 months and the farms are nearby.

Po’boy: A big sandwich on a long, light roll. Hot sausage, fried shrimp or roast beef might fill it.

Gumbo: A rich, spicy soup with many variations.

Roux: Fat (lard, oil, butter) and flour stirred and cooked until it darkens.

There are loquats and strawberries in April, figs and peaches in summer, and oranges and grapefruits at Christmas. Seafood abounds—there’s even local rice to try, and goat, rabbit and pork are raised as close as 30 minutes from town. Homemade boudin sausages are sold at gas stations. Abita is the Louisiana beer (of course, there are other micro-brews, as well), Tabasco is their hot sauce, and Steen’s is their (cane) pancake syrup. There’s even local salt from the mines under Avery Island. While the oyster season was just about done when I visited (I still found a knock-out fried Louisiana oyster po’boy), Gulf shrimping had begun, and it was crawfish season, too. My Northeast head was spinning.

Everyone in Lafayette had a lot to say about gumbo: a dark or light roux, okra or none, seafood or chicken and sausage, garlic or just the essential onions, celery and green pepper base, the New Orleans tomato version vs. the no tomato Cajun one. Everyone makes gumbo and everyone has his or her own version.

The seafood gumbo I ate at the roadside Bon Creole just outside of New Iberia was dotted with shrimp, dark and not thickened. A portion of white rice and a portion of potato salad came along the bowlful. Both are supposed to be dumped into the soup.

Like so many typical dishes in Louisiana, crawfish bisque also starts with a roux. But the roux must be made with crawfish fat, which requires cooking the tasty crustaceans first and delicately taking the small spot of fat from the head. The fat makes the roux, and the first cooking broth is used in the bisque. The small bodies are then scraped and stuffed with a mix of breadcrumbs, more chopped, sautéed, aromatic vegetables and minced tail meat. Then they are floated in the dark soup, as well.

This elaborate, one-time-a-year process yields an amazing depth of flavor. Home cooks might make it for a special occasion, and the down-home restaurant where we ate it makes it only this time of year. We ate friend crawfish in jambalaya and in a corn stew (maque choux), but I liked the rich bisque best by far because of the time and care it takes, the celebration of the season and the triple use of the crawfish.

As much as it impressed me, I don’t think I’ll be making that bisque at home anytime soon. However, I am going to try barbecued shrimp and grits and maque choux in the corn season. Jambalaya would be a great party dish this summer, too. While my Lafayette friends would be aghast at the substitution, I think I can tweak it local using locally grown vegetables to start and Hudson Valley sausage and chicken. I bet it’ll still be delicieux.