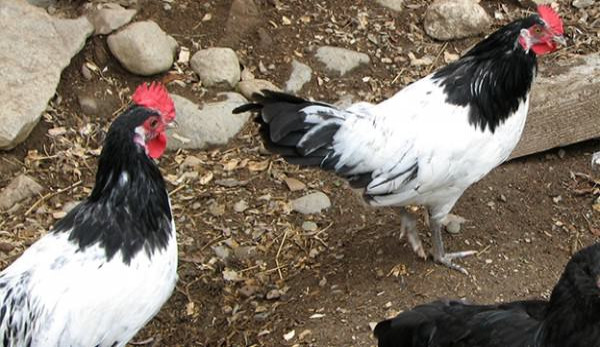 Use: The Lakenvelder chicken breed lays well, hens are non-broody setters of medium-sized porcelain-white eggs. Though the breed is not very large in size, chickens produce a small amount of tasty meat. Plus, the breed, with its strong contrast of black and white feathers, resembling a dark shadow cast on a white sheet, makes a beautiful flock addition.

History: Several different stories are circulating regarding the origins of the Lakenvelder chicken breed. Some say the breed was developed near the border of Holland and Germany during the early 19th century. Others will argue that it has a far more ancient lineage, possibly having ancestors related to the first domestic chickens. What we do know of the Lakenvelder breed is that it first arrived in America around 1900 and was admitted into the American Poultry Associationâ€™s Standard of Perfection in 1939.

Conformation: The Lakenvelderâ€™s head, neck, saddle and tail has rich black plumage while its body is a brilliant white. This type of color contrasting is sometimes referred to as a â€śbelt.â€ť The chicken breed is quick to mature, yet its distinctive plumage and markings usually take until the third molting to fully appear. Atop the Lakenvelderâ€™s black head sits a red, medium-sized single comb with five points, which stands uniquely upright on females. Its red wattles are medium-sized and well-rounded. Its earlobes are white, and its legs are slate. Standard Lakenvelder cocks weigh 5 pounds and hens weigh 4 pounds; bantam cocks weigh 24 ounces and bantam hens weigh 20 ounces.