Do you have llamas or alpacas on your farm? We do! Our llama is a pretty, spotted male named Bandit. He likes horses and lives with our granny Standardbred, Maire. They are good friends. 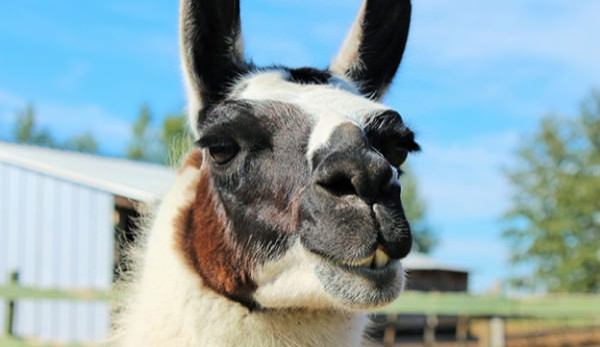 Do you haveÂ llamas or alpacas on your farm? We do! Our llama is a pretty, spotted male named Bandit. He likes horses and lives with our granny Standardbred, Maire. They are good friends.

Llamas andÂ alpacas used to be very expensive and only rich people could buy them. Nowadays, there are llamas and alpacas priced for every budget. You could evenÂ adopt some llamas or alpacas if you want! There are lots that need good homes.

Did you know that all South American camelidsâ€”not just llamas and alpacas but also their wild relatives, guanacos and vicuĂ±asâ€”are collectively known as lamas? This is reflected in the name of the worldâ€™s largest llama registry, the International Lama Registry, which also maintains separate studbooks for the other South American camelids and their crosses.

Llamas and alpacas are related to camels. Their most distant ancestor was a housecat-sized creature called Protylopus, which originated in North America 40 to 50 million years ago. About 3 million years ago, Paracamelus, the ancestor of today’s camels, migrated north across the frozen Bering Straits. Two million years ago, llama-like creatures, called Palaeolama and Lama, migrated south through Central America as far as the South American Andes Mountains.

Palaeolama became extinct. but Lama evolved into two modern species: guanaco and vicuĂ±a. Then camelids disappeared from North America along with the woolly mammoth and saber-toothed tiger, but they kept developing in Asia and South America.

In South America, humans began domesticating guanacos and vicuĂ±as about 7,000 years ago. According to studies conducted by a lady named Dr. Jane Wheeler and her colleagues, llamas were domesticated from wild guanacos and alpacas from wild vicuĂ±as. Domestication occurred at high altitudes in a high plains region of the Andes Mountains (called the altiplano) in eastern Bolivia, southeast Peru, and northern Chile and Argentina.

Llamas and alpacas were important to the people of the altiplano. Llamas became beasts of burden capable of carrying heavy packs along the high mountain trails; they also provided fiber for weaving strong ropes and people ate them, too. The Incas, a powerful tribe that once ruled much of South America, constructed a 3,250-mile road system through the highlands and a 2,520-mile coastal roadway that connected the far-flung corners of their empire. They had no horses, so transport was by foot using leading pack llamas.

Altiplano herders believed that humans and lamas arose from the same source, so they are governed by the same deities. Llamas too old to work were sacrificed to Apu Illapu, their rain god, and to the Incan Earth goddess, Pachamama. Herders buried the bones of sacrificed llamas in the enclosure into which they were expected to reincarnate. The meat of sacrificed llamas was eaten.