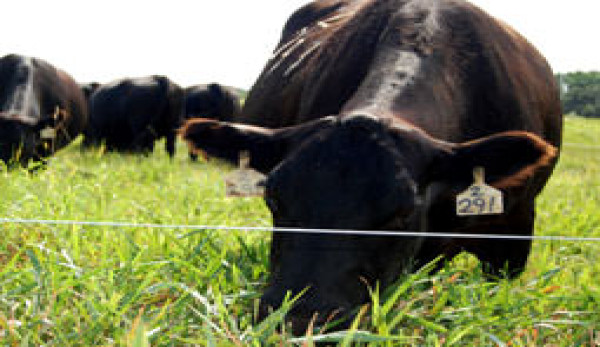 For both large- and small-scale producers, a lack of farmland is standing in the way of achieving their farming dreams, whether by impeding their farmâ€™s launch or preventing expansion of an existing operation. According to a recent survey of participants in the American Farm Bureau Federationâ€™s Young Farmers & Ranchers program, 21 percent of young farmers cite a lack of sufficient farmland as their top concern. Meanwhile, in a small-scale survey of cattle producers in southeastern Iowa, 100 percent of respondents revealed that a lack of land was their primary barrier to expansion.

With the support of the Leopold Center for Sustainable Agriculture, researchers at Iowa State University are investigating the potential of managed grazing practices to break down some of these barriers by allowing cattle producers to more efficiently use the acreage at their disposal, while also stockpiling forage for winter feeding and, ultimately, contributing to the long-term health of their farmland. Led by Jim Russell, cow and calf nutrition specialist in ISUâ€™s Department of Animal Science, the researchers are comparing three management-intensive grazing systems: rotational grazing, strip grazing and mob grazing.

In rotational grazing, pastured cattle are moved to a new paddock every few days. In strip grazing, a paddock is subdivided into fenced-off strips, with cattle having access to a new strip daily. In mob grazing, each strip is further subdivided. The cattle are stocked at an extremely high density (hence the term mob) and moved several times per day.

“[Essentially,] they get four meals a day as opposed to one big meal a day or a whole acre of land every several days,â€ť explains graduate student and research assistant Margaret Dunn.

Over time, mob grazing is believed to have profound ecological benefits; studies have also suggested that mob grazing increases legumes, promotes the even spread of manure, minimizes erosion and maximizes carbon sequestration. Testing these hypotheses is central to Russellâ€™s project. Before theÂ pastures were stocked, soil was sampled for bulk density and carbon content; core samples were also taken throughout the research period. The researchers also evaluated each pastureâ€™s water-infiltration rate.Â

Russell and Dunn are quick to point out, however, that financial sustainability is of the utmost importance in evaluating these systems.

To this end, the researchers also assessed over time the cattleâ€™s weight, body condition scoring, birth rates and productivity, as well as variables like grazing efficiency, forage makeup and forage quality. Although data analysis is still in the early phases, the goal is to use the information gleaned from this round of research to establish a baseline for future experimentation.

Russell and Dunnâ€™s research efforts are highlighted in a video produced by the Leopold Center. The short filmâ€”along with more information about the projectâ€”can be found at www.leopold.iastate.edu.