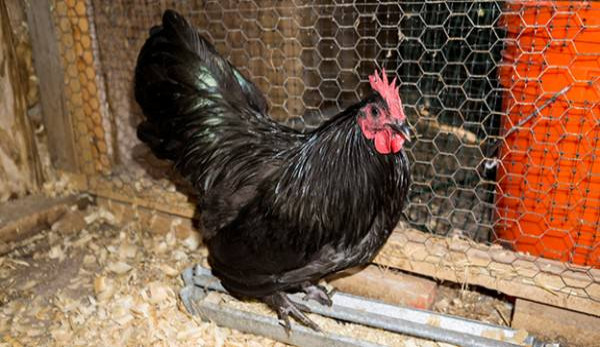 Use: The Langshan is the dual purpose breed of the Asiatic Class, being the best layers in that group. They are very good layers of dark brown eggs. Smaller and more active than other breeds in the Asiatic class, they can be used as a table fowl.

History: Langshans originated in China. They were imported into England by Major Croad in 1872 and into America by 1876. One of the three breeds recognized in the Asiatic Class in the American Standard of Perfection. The Black Variety was first admitted in 1883, the White ten years later and the Blue over 100 years later in 1987.

Conformation: The Langshan is the tallest of the non-game breed. Although it is the lightest of the Asiatics, it stands the tallest. Like the other Asiatic breeds Langshans have feathered shanks â€“ though the feathering is not as profuse as Cochins or Brahmas. The Langshan has a distinctive U-shaped profile; the head and tail forming the uprights. Langshans should have a stately appearance set upon firm, balanced legs. They have a large, well-spread tail and great depth of body. They have white skin and a Single Comb. Standard weights: Cock: 9 Â˝ lbs, Cockerel: 8 lbs., Hen: 7 Â˝ lbs., Pullet: 6 Â˝ lbs.

Special Considerations/Notes: Langshans are not typically high on the list for farmyard chickens, but they are prolific layers of dark brown eggs and add a certain majesty to any poultry yard.