Originating in England, the Large Black hogs were initially selected for bacon; they also have large hams. Identify them by their dark pigmented skin and large, dropping ears that nearly cover their face. 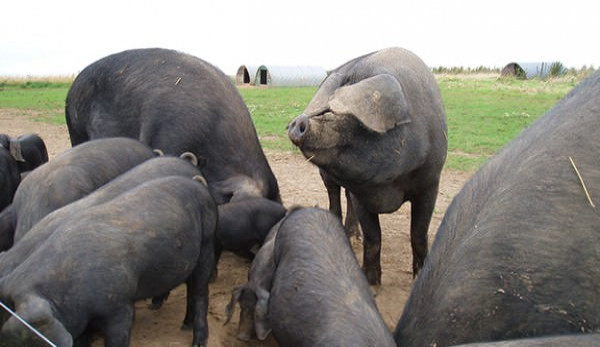 Use: Large Blacks have light shoulders, large hams and good sides for bacon. The meat is finely textured, well-marbled and medium-pink in color. They’re easily managed, hardy and thrifty, meaning they can maintain weight well. The sows have good maternal instincts and are prolific mothers. Some sows can reproduce up to as long as 9 years.

History: Also known as the Cornwall, Devon or Lop-eared Black, the Large Black originated in Cornwall and Devon areas of England in the late 1800s. Today, very small numbers of Large Blacks can be found in Great Britain, Australia, Ireland, Canada and the United States. They were initially selected as a bacon type, resulting in its long and deep body.

Conformation: The Large Black is a full-sized pig with intensely black pigment in the hair and skin. They have long, straight faces and snouts. The large, drooping or lopped ears nearly cover the entire face down to the snout, covering their eyes completely and often obstructing their vision. The dark pigmented skin protects the hogs from sunburn.

Special Considerations/Notes: Large Blacks can be managed easily on pasture and with a variety of feeds. They’re recognized as hardy and thrifty (meaning it can maintain weight well); they were originally raised in rough conditions, left to clean up fields, brush, crop residue and hardwood forests. Large black sows have good maternal instincts and are prolific mothers, averaging 10 to 13 piglets per litterâ€”and are know for their longevity.