Leaf-Footed Bugs and How to Manage Them

Leaf-footed bugs are a southern pest that might be marching northward. Learn how to identify and manage this pest in vegetable gardens and flower beds. 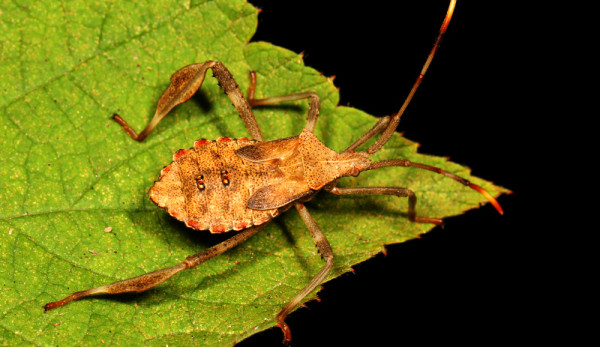 Up until the last three years, I seldom saw leaf-footed bugs in my Pennsylvania garden. But for the past three growing seasons, there’s been increasing numbers of this pest in my veggie patch. They damaged many of my tomatoes last year, and my neighbor had the same issue in her garden.

Leaf-footed bugs (Leptoglossus spp.) are typically a southern pests, though they’re sometimes found as far north as New England. As adults, these bugs are very conspicuous, reaching to between an inch and an inch and a half in length. They’re shaped like an elongated shield, and their rear legs have flattened, leaf-like protrusions extending from them, giving rise to their common name of leaf-footed bugs. Leaf-footed bugs use a needle-like mouthpart called a rostrum to suck plant juices from fruits and foliage. They look a lot like squash bugs on steroids.

Unfortunately, as nymphs, they’re conspicuous, too, but for a different reason. Leaf-footed bug nymphs exhibit gregarious feeding behavior, meaning they all cluster together to suck sap from host plants. Last summer I was finding clusters of eight to fifteen nymphs feeding on a single tomato. Nymphs are small and sway backed. They do not yet have the leaf-like extensions on their back legs. Eggs are laid in rows along stems or leaf veins.

What Do Leaf-Footed Bugs Eat?

In my garden, I found these pests feeding on my tomatoes, but they do eat many other crops. They’re an important pest of citrus in the south, and they also feed on pecans, peppers, berries, eggplants, okra, watermelons, plums and certain grains, among many other plants. They also occasionally feed on ornamentals.

As they suck plant juices, they cause plant tissues to become dimpled and cork-like. Severe feeding can cause fruit drop. In my garden, they definitely rendered any tomato they attacked inedible.

How to Get Rid of Leaf-Footed Bugs

Though my personal experience with this pest is limited due to the fact that it’s still a fairly minor pest here in Pennsylvania (though that appears to be changing), I can tell you that using the sticky side of a piece of duct tape is a great way to collect nymphs and eggs from host plants. Because they congregate together to feed, collecting the nymphs is fairly easy, if you head out to the garden on a warm afternoon. I suppose a bug vac would be a good way to suck them up, too.

Because they feed with a piercing-sucking mouthpart, much like squash bugs do, managing this pest with pesticides is reported to be pretty challenging. Neem and insecticidal soaps are said to be affective against the nymphs, as is horticultural oil. Adults are much more resistant to pesticide use, however. It’s also recommended that you cover affected plants with floating row cover if you should happen to notice adult leaf-footed bugs in the garden preparing to lay eggs.

Facing new garden pests is always challenging. Sadly leaf-footed bugs aren’t the only newcomers to my garden in recent years. I’ve seen other Southern pest species in my garden just within the past few years, including harlequin bugs, lygus bugs, tomato pinworms and tobacco/geranium budworms. There’s evidence that the ranges of certain insect species are shifting northwards, and, sadly, we gardeners will be the first folks to take notice.