Plants in this invasive family can cause quite a headache to gardeners—but they can also be used for good. 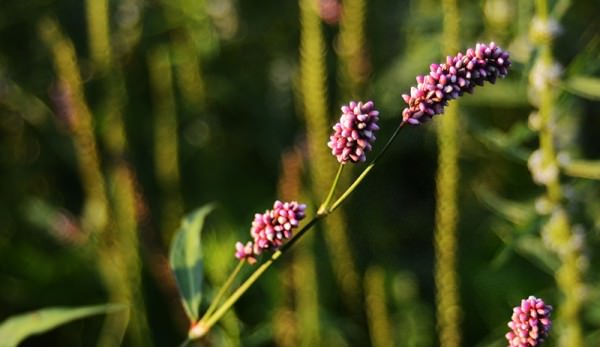 The common invasive knotweed is one of the plants people love to hate. So, of course, I’m irresistibly drawn to get to know it.

What I’ve learned about this plant much more complicated than just one common name can cover. “Knotweed” is the nickname of several amazing plants in the Polygonaceae family, which also includes buckwheat, yellow dock and rhubarb, so it is not a stretch to find yet another very useful plant hiding under all the drama.

Yes, it is inescapable: These plants are highly “successful” wherever they grow. For several years, I’ve kept fo-ti, one of the knotweed plants, in a pot that goes outside in the summer and comes inside in the winter. It has not lept over the deck railing to take over the backyard—at least not yet. But most of its cousins have incredibly deep and wide root systems that are impossible to dig, spray or fire bomb out of the neighborhood. Once established, they take careful attention: Eat them, make medicine from and constantly prune them or else you will find that in that one day you left them to their own devices, they ran away with the farm.

Here are a few of these plants in the knotweed family that you should learn to love despite the headaches they may cause you.

In Traditional Chinese Medicine this plant is called bian xu. It was once believed to be the most common knotweed folks found in native habitats, but I think that’s changed. Common knotweed is happiest in wetlands and moist ground and is also called prostrate knotweed. This is a creeper that you will most likely have noticed in the cracks between paving stones in your walkway. The leaves clasp the stem at their base, and from this protected space arise the tiny flowers that can sometimes be pink but are more likely to be softly green with darker green striping.

Common knotweed has a long Western Herbalist tradition of use in coughs and catarrh. It is mucilaginous and helpful as a gentle and soothing expectorant.

Also known as hu zhang in TCM, Japanese knotweed can be found in 39 of the 50 states and is considered invasive in at least 16 of those. The one bright spot about the pervasiveness of this plant is that it, just like its relative buckwheat, is an important nectar source for honeybees.

Japanese knotweed roots can go up to 10 feet deep. The plant is a fast climber and loves disturbed ground and ditches. In Japan, the plant is managed by foraging practices that see it as a delicious addition to the table. The family resemblance to rhubarb is found in the tart taste it adds to many dishes when the young asparagus-like shoots are selected. The roots of Japanese knotweed have been shown to contain resveratrol and, therefore, are used in cardiovascular formulas. They are also increasingly being used in lyme disease protocols.

This fast growing vine has large, heart-shaped leaves. You are more likely to run across it in the wild in China, though it has recently been introduced to the U.S. It is hardy in zones 5 to 10 and likes full sun, so it would probably be successful in taking over my backyard if I didn’t keep it in a pot.

The vine can grow up to 30 feet and needs to be trellised to have any chance at control. Any part of the vine that touches the ground will take root. The skinny roots that are subsequently produced are not what you want to harvest, though you can use them to start new plants. Underneath a fibrous root system this plant creates a large tuber. In Asian countries, it is common to expose a developing tuber and place a form around it to encourage it to grow in the shape of a human. These tubers go for ridiculous prices as they suggest even more health and vitality than the norm.

Both the root and the stem of fo-ti are used. The stem, known as ye jiao teng, is cut in the winter when the plant has been growing for a few years, have bark and are at least the size of a pencil. The tuber, known as he shou wu, is harvested in the fall after three to four year. Fo ti root is known to be an important tonic for the adrenal glands and a general rejuvenator. In legend, it is believed to turn gray hair black again and provide long life and strong libido.

While you may not choose to grow any of these in your backyard as a general gardener, it may serve you well to learn more about plants around you that are considered invasive. Knotweeds are one of the most hated plants in this regard, and troops of concerned citizens routinely go after them with pitchforks and torches. If you join such a party, be sure to set aside as much of the food and medicine as you can salvage—it will do you good!