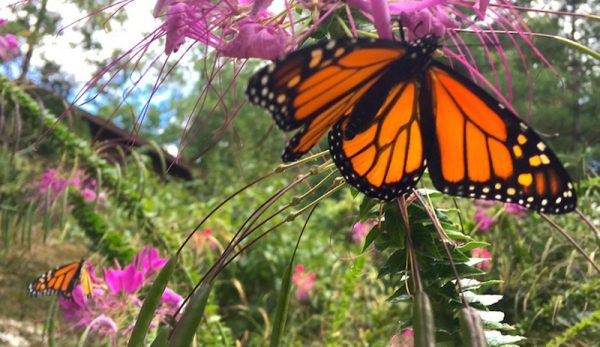 Monarch butterflies have been dealt a real blow over the past few decades. Extreme weather, the logging of their overwintering habitat, lack of milkweed and humans’ increased reliance on pesticides are largely to blame. To help, I’ve planted plenty of native milkweedâ€”the monarch butterfly’s host plantâ€”on my land. I’ve also given away scores of milkweed plants.

But even when a monarch does find a nice stand of the stuff and deposits her eggs, it’s only one step. Fewer than 10 percent of these reach maturity thanks to natural predators, pathogens and, yes, pesticides. True, a single monarch can lay hundreds of eggs, but I still disliked those oddsâ€”particularly in light of the monarch population’s sharp decline. I wanted to do more.

The Great Indoors? Not So Great

For years, teachers, citizen scientists and other well-meaning folks have raised monarch butterflies indoors. (And, I confess, before I knew better, I did, too.) When protected from predators, the monarch’s survival rates do greatly improve. Even so, butterflies that look healthy might not really be ready for take-off.

See, although I’m neither a biologist nor a professional lepidopterist, I sometimes get to pick the brains of such people. While writing a different monarch-related article a while back, I learned that releasing indoor-raised monarchs into the wild might cause more harm than good. Rather than stop raising monarchs, I modified my approach based on what I’ve read and learned from those who work with these amazing creatures full-time.

Shorter day length, greater fluctuation in temperature from day to night, and deteriorating milkweed quality are thought to work together to trigger a migratory response. In other words? Instead of having fully developed reproductive organs and the urge to breed, these late summer and early fall butterflies should be more likely to tank up on nectar and put on fat for the journey south. If, instead, they’ve been raised in artificially lit, air-conditioned environments and given only the choicest milkweed plants, they probably won’t make the trip. As a result, I now raise monarchs only in screened cages I keep outdoors.

Testing for a Parasite Called OE

And as for the cages themselves? To avoid overcrowding and to mitigate disease, I house a maximum of four monarch caterpillars at once. I also carefully sanitize cages inside and out with a bleach solution between every monarch quartet.

Between threats such as parasitic wasps, nematodes and fungal diseases, a lot can go wrong for a monarch caterpillar in the wild. That’s why I only collect monarch eggsâ€”never hatched caterpillars.

One of the most serious threats to monarchs is a single-cell parasite known as Ophryocystis elektroscirrha, commonly called OE. OE-infected monarchs might look perfectly healthy, but they easily spread the deadly parasite to others. I won’t release any monarch I’ve raised until I am certain it is OE-free.

Donning disposable, surgical gloves, I carefully test for OE by pressing a bit of clear tape against the lower portion of the butterfly’s abdomen. Next, I affix the tape to a clean, glass slide and examine the slide under a microscope at 200x magnification. (See accompanying graphic for details.) In healthy butterflies, I see only magnified scales. But in OE-infected butterflies? I see tell-tale lemon-shaped spores scattered throughout. Although rare, I occasionally have encountered an OE-infected monarch. Sadly, rather than release it, I must enclose it in an envelope and place it in my freezer for several hours. This euthanizes the monarch.

An OE-infected butterfly emerging from its chrysalis above any caterpillars or milkweed plants can further spread the parasite. To avoid this, I make sure monarch caterpillars caged together are roughly the same age. Because OE spores persist in the environment, I take extra care to thoroughly sanitize cages, tools and any surfaces that might have come into contact with them.

Raising monarchs responsibly takes time and effort. Each season, I raise only a small numberâ€”truly too few to make much quantitative difference. But I have seen the qualitative value. My neighbors frequently stop by to check on each caterpillar’s progress and report their own sightings of various bumblebees, moths and other pollinators. Whenever I bring up gardening for these creatures, avoiding pesticides and letting the lawn go a little shaggy? There’s been no better ambassador than the monarch.