Leasing Farmland Can Be A Great Way To Get Started

Many farmers want their own land, but as Brian Cole of of Bigfoot Farm points out, leasing farmland can get young growers farming faster. 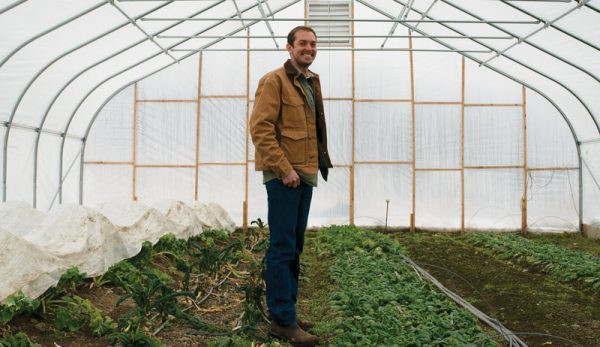 If you dropped by Bigfoot Farm in western Massachusetts, you wouldnāt get the sense that the farm is at all temporary or even that itās relatively new. Rather, Bigfoot Farm feels like a familiar and substantial part of the landscape.

Brian Cole started Bigfoot in 2018 on a single acre in the foothills of the Taconic Mountains in Williamstown, Massachusetts, a small town in the northwest corner of the state that borders Vermont and New York.

For a combination of practical and philosophical reasons, Cole created the farm to be a market garden in the style of farmers/authors Eliot Coleman (The New Organic Grower) of Four Season Farm and JM Fortier (The Market Gardener) of Le Ferme to Quatre-Temps.

Cole grows all of his crops in permanent, raised beds that are 30 inches wide by 50 feet long and separated from one another by 15-inch pathways mulched with straw or wood chips.

The only machinery on the farm is a BCS, an Italian-made two-wheel tractor that can run a variety of implements ranging from a rear-tine tiller to a flail mower.

The vast majority of the work on the farm is done by hand by Cole himself. In addition to keeping machinery and labor costs low, this method of growing vegetables allows Cole to prioritize the health of his soil by avoiding unnecessary tillage and compaction.

It also allows him to grow his crops at ever-increasing densities, which results in impressive yields.

Don’t have a tractor? Here’s how you can make that work for you.

After leaving California to attend college in Williamstown, Cole began to dream of farming in Massachusetts. He spent a handful of years after graduation working on farms across the Northeast before he felt ready set out on his own.

The only problem was land. Coleās dreamālike that of many young farmersāhad always been to farm on his own property. But land values in the area were high. Purchasing his own acreage simply wasnāt an option in the short term.

Coleās situation is by no means unique. A 2017 survey conducted by the National Young Farmers Coalition found that land access is the No. 1 issue that young farmers encounter today. Looking at the numbers, it becomes apparent why.

According to the American Farmland Trust, 40 percent of the nationās agricultural land is owned by people over the age of 65. This trend also has the power to become self-perpetuating.

As young farmers have an increasingly difficult time accessing land on which to start their own farms, more of them decide to pursue other careers. This leaves an ever-growing percentage of farmland in the hands of older farmers.

In response, the public and nonprofit sectors have set out to promote land access. Minnesota and Rhode Island, for instance, have developed innovative programs to enhance access to historically agricultural land. And the National Young Farmers Coalition recently published a guide for farmers interested in working with land trusts to find farmland.

Despite these best efforts, many young farmers wonāt be able to find farmland of their own on which to farm.

Learn if a walk-behind tractor could be right for your farm.

So, an increasing number of young farmers are leasing farmland to begin their farms.

For Cole, finding land was no easy process. Initially, he was interested in cobbling together the rights to farm on multiple peopleās front yards. (This is a method popularized by urban farmers such as Curtis Stone.)

Many property owners were intrigued by the idea. But when he disclosed the details of the kind of access he would need, they tended to lose interest quickly.

Some landowners were put off by his need to be on the property on a daily basis throughout the growing season. Others disliked the fact that he wanted to erect a small high tunnel for limited season-extension growing.

Eventually, mutual friends introduced Cole to a landowner with a large property that he was using to raise alpacas and harvest maple syrup. The landowner also occasionally rented the space for events and weddings. He was intrigued by the idea of being able to source produce for those events from the property itself.

So, he and Cole made a handshake agreement that Cole could use 1 acre of his land for a year. In return, Cole helped the landowner bail hay and process maple syrup.

Now, two seasons after that initial agreement, Bigfoot Farm is still operating on the same land. Cole has the high-tunnel that he always imagined.

He might not have his own land. But by leasing farmland, Cole has a farm business that continues to grow every year.

You need healthy soil for better crops. Here’s how to improve your growing medium.

Although leasing farmland may not be the ideal that many young farmers dream about, it can be a necessary reality for those committed to setting out on their own. If you’re a farmer looking into leasing farmland, the first step is to develop a sense of the kind of property youāll need.

To begin with, searching for land to lease can look a lot like shopping for property to purchase. Start by thinking about your future farm business. Seek a property that will allow you to meet that businessā needs.

Begin by outlining the basic attributes of your ideal parcel. How much open acreage will your farm require, for instance?

Additionally, take into consideration the various attributes of a property that will make farming on the land more or less difficult. This includes:

Beyond the physical qualities of the property, itās also important to think about its location relative to the markets you hope to sell in. It can be tempting to look for property thatās cheaper to rent and far outside of the nearest town.

But think carefully about the expenses associated with all those delivery miles.

Additionally, think about the utilities that your farm will need. What kind of water access will you require? What sort of electrical needs will you have?

Similarly, have a sense of the infrastructure that youād like the property to have or that you anticipate needing to build. Itās important to answer all of these questions before you begin your search for land.

If you’re considering buying a tiller, keep these things in mind.

Out in the Open

Once you have a good idea of what your ideal property looks like, itās time to begin your search. There are a number of national and regional nonprofits that can help match farmers and willing landowners. But word of mouth can also be a powerful tool.

Once youāve found some potential landowners, Cole recommends being upfront with them about your vision for your future there.

āDonāt try to minimize the impact of your operation up front,ā he says. Although it may be tempting to make your expectations sound minimal so as to gain access to the land, this can backfire down the road when you want to expand your operation in a way that the landowner feels caught off-guard by.

Itās especially important to be upfront about any infrastructure you anticipate wanting to put up on the property, including fencing, hoop houses or storage buildings. Itās also critical to find a landowner who is willing to make a commitment to having a farmer on their land.

In Coleās experience, many landowners wanted the ability to walk away from the arrangement if they decided that they no longer wanted a farmer on their property. Although this might be entirely understandable, this type of uncertainty is far from ideal for the lease.

Invest time in constructing a lease that works in your favor. And donāt be afraid to get a lawyer involved.

In Coleās case, he and the landowner signed a five-year lease after his first year on the property that stipulates that the landowner can only break the lease if Cole violates other terms in the contract.

Learn more about the costs associated with starting a small, organic farm.

Although some farmers are leasing farmland with preexisting infrastructure, many farmers are confronted with an absence of infrastructure on their leased land. Coleās 1-acre plot, for instance, came with access to a well, but no electricity or existing fencing.

Because deer are prolific in the area and erecting a permanent deer fence was out of the question, Cole put up a temporary electric fence that has been highly effective.

When it comes to electricity, Cole has learned to live without it. Although it would be helpful to be able to ventilate his high tunnel with fans throughout the summer, Cole has simply gotten by with passive ventilation.

Many growers harvesting the quantity of salad mix that he is would probably turn to an electric greens spinner. But Cole is content with the hand-crank system heās currently using.

A lack of electricity also means that Cole has no refrigeration on his farm. So heās had to find some workarounds there as well.

For wholesale orders, Cole typically bypasses refrigeration all together and delivers to his customers immediately after he finishes picking. When it comes to larger harvests for the weekly farmers market, Cole spent his first season packing all of his produce into kitchen fridges at his house.

After that first year, Cole picked up an old commercial walk-in fridge that he re-assembled in his backyard. Now, he can pack produce into coolersāCole has enough of them to make any car-camper enviousāfor the 10-minute drive from the farm to his house.

Similarly, without electricity to run a heater or germination mats, Cole couldnāt propagate his seedlings on the farm. It took him a while to come up with a solution.

Eventually he found a local greenhouse and nursery that was willing to rent him space in a heated tunnel. Cole developed a system that involved germinating his seedlings at home. He then transported them over to the greenhouse on the other end of town.

Many farmers only use a portion of their greenhouse to start their own seedlings. Some might be willing to heat more space if you pay for the additional costs.

Another option is to order in your early-season starts from a seed company that specializes in that sort of thing.

As Coleās experience shows, leasing farmland to start a farm business is certainly possible. But it’s not without its challenges.

Leasing farmland may not be an ideal circumstance for young farmers. But it will be a reality for many of those who are committed to setting out on their own. For those farmers who do find themselves establishing a business on someone elseās land, itās important to enter into the process with a recognition of the unique set of obstacles youāll be facing.

Overcoming these obstacles, will, however undoubtedly make you a better farmer in the long run.

When leasing farmland, itās important to keep in mind that everything you build might be temporary. Here are some ideas to keep your infrastructure easy to move.

This article originally ran in the May/June 2020 issue of Hobby Farms magazine.