Liatris: A Subtle Beauty In The Native Prairie

This native plant boasts a pretty flower, but it’s the root that holds the medicinal value. 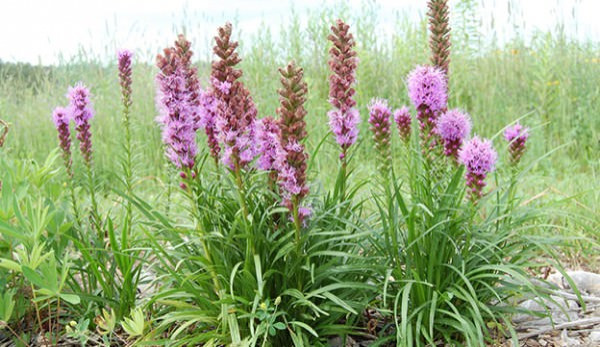 I’ve received my first batch of gardening catalogs for the new year. One of them should have an expiration date printed on it, like milk. It seems that we get this one every year and look through it with dreams and plans of what we might order before placing it on the pile. We unearth it again in late February or early March only to find that most of the things we wanted to order are already sold out.

Our farm focus this year is to bring out the beauty of our farm in anticipation of a pretty busy season of agritourism, so my husband walked this particular catalog in from the mailbox and immediately filled out our order. Chief on the list is liatris, in this case Liatris spicata, known commonly as dense blazing star, which is native here in Ohio.

When we first started the farm we dug the pond and surrounded it with hundreds of liatris bulbs. For the first couple years the flowers bloomed and spread. Unfortunately, after that, they lost their foothold. Our recovering prairie habitat boasted some pretty dismal soil and the liatris was one species that just couldn’t get enough of what they needed to thrive. As I read up on this beauty, there was some suggestion that it benefits from prairie fires. If that is the case, we may try a control burn on a section of our prairie this coming year and see if the resulting nutrients bring back some of the dormant seeds from years past.

Liatris is a genus of 43 sister species. Common names like gay feather and blazing star go a long way toward painting a picture of what you can expect when these white, pink and purple blooms lift above the surrounding grasses. The blooms are small and multiple, arranging themselves all along a stalk held above the leaves called a raceme. Each bloom bursts open in a wispy, fluffy firework from August through October. One or two in the landscape can easily be overlooked, as they aren’t a robust plant. If you want to plant liatris, it’s best to do so in a large swathe of color.

The blooms are pretty, but the tuberous roots, primarily made up of inulin and resin, hold the medicine. The Menominee and Cherokee both shared their uses of this blazing star with us. They have been traditionally used for stomach disorders that involve cramping and spasm. Across the board, it seems to have been used as a diuretic and a snake-bite remedy.

A Medicine Of Mystery

Liatris isn’t mentioned a lot in western herbalism today. L. punctata, commonly known as spotted blazing star, is the one that is most often mentioned when if comes to foraging for edibles. It’s root is said to be quite tasty when roasted. It is also the main variety that is showing up in research. In 2000, a study in the Journal of Ethnobiology found it to have moderate anti-cancer activity. Other than that, we just haven’t done a lot of lab work on this prairie native. If I were a betting gal, I think I’d take a look at the potential liatris might have with diabetes because of its inulin content.