Lightning poses a threat to cattle, horses and other livestock on pasture. Here are the signs of lightning strike and how to protect your animals. 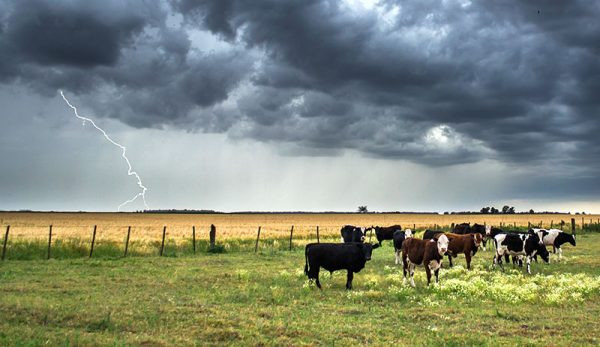 Sometimes, a farm vet is called out to perform a necropsy (animal autopsy) on an animal found dead in the field. Every vet (and forensic detective) knows that when determining cause of death, getting clues from the environment is just as important as the observations from the animal itself. In the spring and summer, when thunderstorms are known to roll in on hot afternoons, lightning strike is a cause of death in livestock to always keep in mind. (Tips on how to avoid it appear later in this article; here are tips on readying yourself and your livestock for a natural disaster such as a severe storm.)

Most farm animals that die from lightning do so via ground current, or when lightning strikes a tree and the electricity continues to run along the ground, affecting animals standing near it. When determining whether an animal has died from lightning strike, environmental clues can help. Knowledge of a recent thunderstorm is certainly helpful, as is finding the body near a large tree. Sometimes entire groups of animals are killed, which happened in Chile a few years ago when more than 60 cows died during a storm. Photos from this event show a group of animals next to a tree in an otherwise open field.

Physical indications that an animal has died from lightning strike are often not as apparent as you might think. Sometimes there are not overtly obvious signs on the animal so you have to rely on environmental clues mentioned above. In other cases, singed hair and burn marks on the hooves will indicate lightning strike, but, almost paradoxically, these findings are rare.

Animals die from lightning either through immediate destruction of the nervous system or from cardiac arrest. Although itâ€™s been said that lightning strike victims bloat faster than from other causes of death, because the exact time of death is usually unknown, this fact doesnâ€™t really help during a post-mortem examination.

Horses, too, can fall victim to the weather. Lightning strike is a common cause of death for mustangs roaming out west; the flat terrain at higher elevations is frequently struck by lightning, and if a horse is the highest thing around, the animal becomes a conductor to the ground.

Ways to Protect Your Animals

There are a few things a farmer can do to help protect a herd from lightning. One is to make sure barns and sheds are properly grounded. Another thing is to arrange pastures so that they contain rows of trees, not singles. Lightning is more likely to strike one large tree as opposed to a group, although this is not in any sense a rule. If possible, keep your animals inside during lightning storms. And at the very least, donâ€™t place a metal water trough at the top of a hill.

Additionally, depending on your finances, the size of your herd, and the set up of your land, you might want to consider livestock insurance that covers lightning strike.

It’s interesting to think that despite all our technology in the 21stÂ century, weather risks in farming never change.