Lily Leaf Beetles: How to Identify and Control This Pest

Lily leaf beetles destroy all types of true lilies. Learn how to properly identify this pest, the regions where you'll find it, and how to mange it organically. 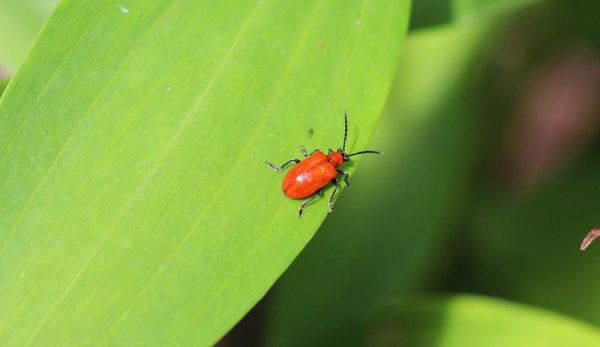 Lily leaf beetles (Lilioceris lilii) are an extremely destructive pest of true lilies. Attacking all species of lilies, including Oriental, Asiatic and Easter lilies, the lily leaf beetle was introduced to North America from Europe in the 1940s. First discovered in Canada, this red, oval beetle has made its way down into New England and might be spreading south.

What Do Lily Leaf Beetles Eat?

Lily leaf beetles feed on the leaves of all species of true lilies, but they also feed on spring-blooming Fritillaria plants as well as lily of the valley, hollyhocks and a handful of other plants. But, the plants that are prone to the highest levels of damage are the lilies. One thing worth noting, though, is that lily leaf beetles do not attack daylilies as they are not in the species Lilium, but rather Hemerocallis.

Adult lily leaf beetles are bright red, oval-shaped and about 1/2 inch long. Their legs and antennae are black. The eggs are orange and laid in rows along the undersides of lily foliage. They’re typically found in May.

Soon, the larvae hatch. Larvae are fat and slug-like. They’re typically orange, brown or yellow with black heads.The larvae are often found clustered together at leaf ends, nibbling on the foliage.

Lily leaf beetles overwinter as adults. No sooner do the lily plants begin to emerge from the soil when this pest begins to feed on the foliage. Upon hatching, the larvae feed on lily foliage, too, causing ragged leaves. As the larvae feed, they pile their own excrement onto their backs (gross!) to help camouflage and protect them from predators.

The larval stage of the lily leaf beetle lasts for two to three weeks before the larvae drop to the soil and pupate underground. Two or three weeks later, the adult beetles emerge. This generation continues to feed throughout the rest of the season before overwintering, typically in a sheltered site, soil, or in plant debris a few dozen feet away from their host plant.

How to Control Lily Leaf Beetles

Both the adult and larval lily leaf beetle are slow moving and easy to handpick. It’s also easy to spot the lines of orange eggs on leaf undersides in the late spring and scrape them off the plants to destroy them.

In situations where hand-picking isn’t possible, organic pesticides based on spinosad are highly effective against these leaf-munching pests. Neem-based organic pesticides are also effective, but primarily against the young larvae, not the adults. Both of these pesticides can negatively impact pollinators, so be sure to follow all label instructions and do not use them when pollinators are active.