While you must protect small animals on your farm from coyotes, remember that coyotes help control rodent pests in your area. 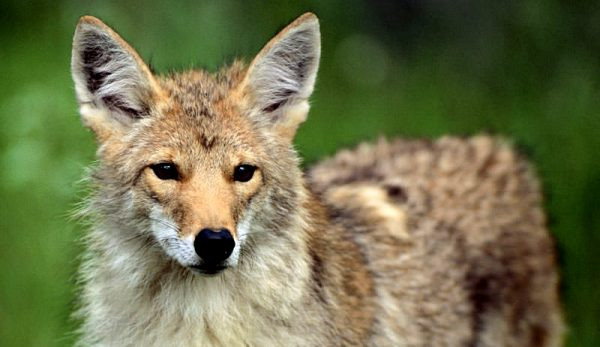 Did you like last week’s big, full moon? Imbir the horse says that Native Americans in Minnesota (that’s the state he came from) call the January full moon theÂ Wolf Moon because it falls when the northern snow is very deep and the wolves howl because it’s hard for them to catch enough to eat. We don’t have wolves in the Ozarks, but we do have coyotes that howl at the full moon and on lots of nights when the moon isn’t full, too. It’s their way of touching base with other coyotes and announcing their presence. Mom likes that sound. She says coyotes sing.

Mom used to stay with a physician friend’s soon-to-foal mares when she lived in Minnesota. She and her friend’s Australian Cattle Dogs, Sage and Curry, slept in a polar sleeping bag in the hay barn overlooking a foaling stall. One morning Mom woke up at daybreak and peeked out to see two coyotes playing with Sage and Curry. They bowed and twirled and romped with one another in the snow as the sun rose over the horizon. It was a beautiful sight that still makes Mom smile when she thinks about it.

Coyotes are kind of scary to usÂ goats andÂ sheep because coyotes sometimes kill and eat small livestock, poultry and even small pets. That’s why Mom and Dad make sure we animals and the chickens are kept in the barnyard or chicken house at night. And besides,Â our friend, Feyza, protects us. Feyza is a livestock guardian dog. People keepÂ livestock guardians, such as dogs,Â donkeys andÂ llamas toÂ chase coyotes away from their farms. Mom isn’t worried about coyotes with Feyza on guard.

The word coyote comes from the Aztec word coyotl meaning “barking dog.” Many Native American tribes consider they coyote a trickster being. Think theÂ Roadrunner and Wile. E. Coyote, except that coyotes are smart!

Before Europeans settled North America, coyotes lived only in our Great Plains states. As settlers moved ever westward, killing off their native gray wolves, coyotes moved east taking the wolves’ place. They moved north, south and west, too, and now there are coyotes in every state except Hawaii, as well as in Canada and as far south as Central America.

Coyotes look like smallÂ German Shepherd dogs with pointier muzzles and shorter, bushier tails. Coyotes weigh between 30 and 50 pounds; males are usually bigger than females and eastern coyotes are bigger than their western cousins. Most are shades of gray, but you might see a blond, red or black coyote from time to time.

Some farmers and ranchers consider coyotes vermin, but coyotes play an important part in the cycle of life. They eat mice, rats, groundhogs and other nuisance rodents, and they also clean up carrion that left uneaten might spread disease. They also eat plants, fruit, insects, birds and garbage. If it’s edible and available, coyotes eat it.

Coyotes are usually active after dark, but it isn’t unusual to spot them during the daytime, too. They tend to sing the most at dusk and dawn. Coyote song consists of high-pitched yips, yaps, howls and barks. Growing pups sing a lot, perfecting their technique.

Coyotes usually mate for life. They breed from January to March, with a gestation period of 60 to 63 days. Both parents prepare a den in a dug-out fox or groundhog hole, a cave, a hole created by a tumbled-over tree, or even in or under an abandoned building before the female delivers a typical litter of six to eight pups. The pups grow quickly. Both parents feed them regurgitated food. Their mom weans them from milk at five to seven weeks of age. They soon learn to hunt on their own.

Sometimes coyotes create problems when they come too close to human habitat. There are things you can do if coyotes become troublesome where you live.

Ask Martok!
Do you have a livestock or wildlife question you want me to answer?Â Send me your question!
Please keep in mind that I receive a lot of questions, so I wonâ€™t always be able to answer each one immediately. In the case of an animal emergency, itâ€™s important to reach out to your veterinarian or extension agent first.