These breeds make great livestock guardian dogs, though you need to follow a few important rules to make full use of these working dogs. 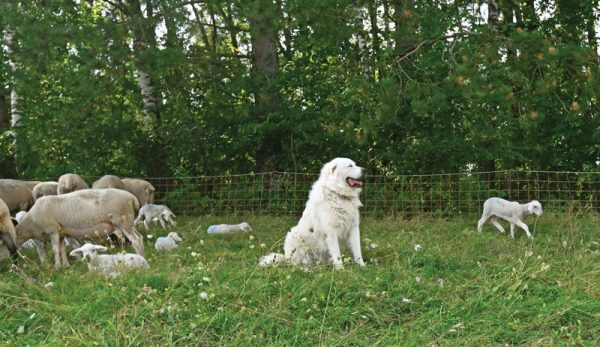 Livestock guardian dogs, also known as livestock protection dogs, are generally largeāwith males weighing more than 100 poundsāand often unfriendly toward other dogs, keeping stray dogs away from the flock. These breeds are bred as working animals, not pets. Their focus is to detect and deter predators.

Most predators stay away from dog-protected flocks to avoid being confronted by the guardian dog.Ā

There are many guardian dog breeds, but the Great Pyrenees is the most widely used in North America. Originally bred by Basque shepherds in the mountains between Spain and France, this breed is probably the least aggressive toward people. Its thick coat and heavy build, however, often make it a poor choice for hot regions.

The breed’s ābear-shapedā head is an identifying breed trait, as is its tendency to bark and āpostureā to threaten away would be 4-legged intruders.

If you have livestock in large pastures and a lot of predators, you might need a more aggressive breed. The white Akbash Dog from Turkey is considered one of the most predator-aggressive and livestock-protective dogs around.

It isnāt as heavy boned as the Great Pyrenees and is proportionally longer legged and athletic with a more wolflike head.Ā  Males are 30 to 33 inches; females about 2 inches shorter.

Like the Great Pyrenees, on small properties it is known to āpostureāāgrowl, bark, snarlāas a part of its defense.

Another native Turkish breed, the Kangal Dog is more mastiff in appearance and is always black-masked dun or fawn. Like the Akbash Dog, itās bite-inhibited (reluctant to bite or even nip) people or its livestock. However, strangers are met with anĀ  intimidating stare and an aloof attitude.

The breed rarely postures (threatens). It watches and then actsāsilently charging a predator. Most recently Kangal Dogs have been successfully introduced to western U.S. sheep producers where grizzly bears and wolves threaten livestock.Ā

The Anatolian Shepherd also traces its heritage to Turkey. While European countries no longer register this breed, itās registered in the U.S.

Developed from Turkish dogs brought to the U.S. and other Western countries, this large, imposing breed is sometimes slow to mature but devoted to its herd. It can be unfriendly toward humans.

Varying in coat length and color, these dogs can withstand hot weather because they are similar to the Akbash Dog in body proportions. Dogs with more mass and more weight are more suited to mountain climates.Ā

The Komondor from Hungary has a long, heavy, nonshedding coat that can develop feltlike cords similar to dreadlocks to protect against weather and wolf bites. This thick coat requires care, and some people just shear it when they shear their sheep.

These dogs weigh 80 to 100 pounds and are as tall as 27 inches. They are very protective and territorial toward two- as well as four-legged intruders.

Individual dogs vary, regardless of breed, and some work better than others. If you start with a puppy, put it with the flock as soon as itās able to be safe around potentially aggressive sheep or goats. A young pup can be housed next to livestock. By 10 to 12 weeks, it should be familiar with the sight, sound and smells of its livestock.Ā

A feral livestock guardian is a liability, not an asset. Itās important to socialize the puppy to humans. Calling its name and handling it at feeding time helps to build respect and trust in humans.

However, these dogs must live with livestock, not with you. They guard and protect the animals they are bonded to as pups. It usually takes 12 to 24 months for pups to become effective guardians with some breeds and individuals. Dogs can take longer to mature and outgrow the instinct to chase or play with livestock.

Livestock guardian dogs intimidate predators by barking and behaving aggressively Most will attack a predator if it doesnāt leave. Some stay with the livestock all the time. Others prefer to roam the perimeter of the herd.

Wandering off property is a common issue and is dangerous for the guardian dog. Owners need to teach young dogs to respect their boundaries, and nothing is better for that than a dog and livestock-proof fence!Ā

These dogs often choose to stay outdoors in all weather conditions. Or they might use the same shelter as the sheep they protect.