In this last of three parts, we learn that managing a mare during pregnancy means knowing what can go wrong when she foals. Here are some vital veterinary facts about foaling. 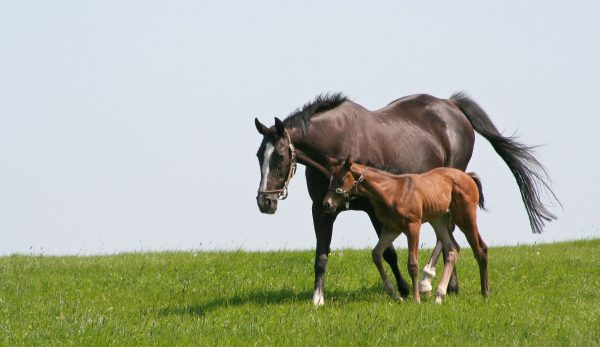 Here’s the last installment of our three-part series on common livestock pregnancy and birthing issues. Revisit what we’ve already discussed regarding sheep and goats and cattle. This month, we consider horses. Of the common livestock species, horses have one of the longest gestations: 11 months. The typical breeding season for mares is the early spring so that, almost a year later, foaling takes place.

Mares typically carry a single foal during pregnancy, but here’s a crucial point: Twins in horses, although infrequent, represent a very dangerous situation. On rare occasion twins do survive, but a mare’s uterus is not equipped to handle more than one foal. This typically results in one of the following situations:

The number of foals a mare can carry at one time during pregnancy isn’t the only thing that makes equine reproduction different from cows and small ruminants. Another aspect is the speed with which a mare gives birth. While a heifer can be in labor for hoursâ€”as long as she’s making slow but steady processâ€”a mare’s delivery, once the placental membranes break and birthing fluids rush out, is comparatively rapid: roughly 20 to 30 minutes, and frequently much shorter than that. Sometimes veterinary textbooks describe foaling as “explosive.” While that might be a bit extreme, relative to other livestock species, it is fairly accurate.

Because a foaling happens so quickly, when things go wrong, they can go really wrong. Therefore, it’s bestâ€”if possibleâ€”to be present for a foaling just in case. One unique aspect in a foaling to watch out for is what’s called a “red bag delivery.” This is where the placental membranes have detached prematurely and the foal’s oxygen supply has been cut off prior to birth. While a normal placenta is supposed to be somewhat translucent, thin, and a yellowish/whitish color, a red bag is just that: red. If, during foaling, you see a red structure being delivered without sign of a foal peeking through, do not hesitate to intervene and cut the placenta open to rescue the foal. This emergency is so dire, you don’t have time to call and wait for your veterinarian to arrive, as the foal will asphyxiate.

Another aspect that differentiates horses from cattle and small ruminants when it comes to pregnancy is the pathology behind the placenta, commonly called the afterbirth. Livestock will “drop” their placenta after a period of time after birth. Cattle can hang onto theirs for as long as a few days. The danger, however, is that the longer a placenta remains hanging from the animal, the more chance it has to act as a ladder for environmental bacteria. It can thus provide infectious organisms a direct line to an animal’s uterus, causing a disease called metritis.

Retained placentas in mares can be life-or-death situations. If a mare has not passed her placenta within three hours after birth, this is cause for concern. Anything over three hours and the mare is at risk for metritis, which in this species can lead to septicemia (blood infection), laminitis (severe and crippling foot inflammation) and death. If a retained placenta in a cow results in a uterine infection, itâ€™s not typically as scary and is commonly treated with antibiotics without too much worry about complications.

Retained placentas in mares sometimes occur because of hormone imbalances and are frequently encountered if a mare has experienced a dystocia, or difficult birth. Sometimes as the placenta hangs from the mare, it will tear, leaving a small piece still attached to the lining of her uterus. Even a small piece of retained placenta can get infected. For this reason, horse owners are advised to keep the mare’s dropped placenta in a plastic bag and have a vet examine it. The vet will lay the placenta out and make sure there are no holes in it. If there are, the mare is often started on a round of antibiotics and a hormone called oxytocin, which induces uterine contractions. Sometimes large volumes of fluid are flushed into the uterus to help lift the membranes out and, depending on the condition of the mare, she might also be put on pain medication. If caught and managed early without complications, the mare should recover with no lasting damage.