Lobster mushrooms and purslane are two flavorful foraging favorites that, if you learn how to spot them, can provide nutritious, delicious dinnertime fare. 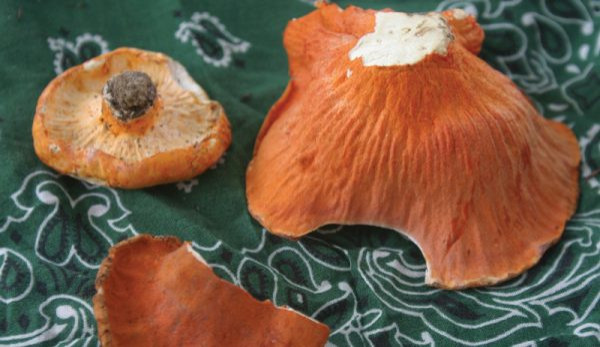 Lobster mushrooms were the first fungus I learned to identify on a mushroom walk. Like a weed coming up through a crack in the sidewalk, they sprouted right in the middle of the footpath.

It’s a truism among foragers that the best mushrooms are rarely found along a path. You have to go cross-country for the best finds. But there are exceptions.

Lobster mushrooms (Hypomyces lactifluorum) can be found under oaks and even hemlocks in rich soil, yet they also like the compacted conditions of footpaths. But to be entirely accurate, lobsters aren’t the only mushrooms that we’re looking at.

You’re actually seeing two mushrooms: a host and a parasite. Slice one in half and you’ll see what I mean.

Lobster mushrooms have a thin, bright orangey-red coating on the outside and bright white flesh on the inside. The color pattern appears similar to the cooked crustaceans.

If you could sample the DNA you’d find that the white part is either a pepper milky (Lactarius piperatus) or a short-stemmed russula (Russula brevipes). Neither of these is poisonous, but neither one is tasty either, although some chefs do use the pepper milky as a spice.

But the reddish-orange coating is another fungus entirely—one that attacks, coats, contorts and consumes either of the first two, to the delight of foragers. Through fungal alchemy it transforms the flavor of unmarketable mushrooms into $15-a-pound gourmet gems.

Some foragers suggest the lobster might commit fraud by hiding the identity of a toxic mushroom and poisoning a gullible forager. But after hundreds of years of recorded eating, the number of instances of poisoning adds up to exactly zero.

I think some foragers can be like politicians in that they just like to tell scary stories, no matter how unfounded.

Lobster mushrooms are the product of rainy summer weather. They can show up from mid-summer to mid-fall. What characteristics should you look for?

So why are they found more often in paths than many other species? I’m not aware of any studies being done. The mushroom industry doesn’t have the resources to invest as much money in research as the fruit, vegetable, dairy and meat industries.

But I’ll hazard a guess.

The underground mycelia of the white mushrooms that come up in a path are stressed from the scarcity of oxygen in the compacted soil. That stress makes them more susceptible to pirate spores from the lobster mushroom. They want to board those weakened, rising mushrooms and seize their treasure.

If we foragers are on the right path at the right time, thought, we can seize that treasure from the lobster pirates for ourselves.

To garden is to have weeds. And yet, if you’re an amateur forager, to have weeds is also to have nutrient-
dense and tasty crops growing in your yard.

But until you learn their secret identities, they will continue to masquerade as annoying weeds, demanding your time to wastefully yank out and toss them.

Once you do learn their hidden qualities, you’ll find that of all your crops, they need the least help from you in terms of watering, planting, mulching or worrying. They won’t, in fact, need any help at all. Gathering these feral crops gives a new, more positive meaning to “weeding.”

That’s especially true when one of the most common garden weeds is also a common food crop from south Asia. It has a spinachlike taste that has the most omega-3 fatty acids of any green. I’m talking about purslane (Portulaca oleracea).

This very drought-hardy succulent plant resembles its more cultivated cousin Portulaca grandiflora, or moss rose from South America. That portulaca is also called verdolago in Hispanic markets and can be eaten as well, with one small caveat. They both have calcium oxalates, so don’t eat mountains of these greens every day or you could find yourself expelling a kidney stone.

But eaten in quantities similar to the amount of spinach or arugula that the average person eats, there should be no problem.

“[Purslane] has omega-3 fatty acids and antioxidants as well as a Fourth of July parade of vitamins and minerals,” says forager and author Green Deane. “I think there’s even an anticancer color guard in there as well. According to experts at the University of Texas at San Antonio, purslane contains 10 to 20 times more melatonin, an antioxidant, than any other fruit or vegetable they tested.”

When young, purslane grows flat on the ground. As it gets old enough to flower it may develop into the shape and size of a mixing bowl. The succulent stems are reddish-brown and almost as wide as a pencil.

The thick, paddle-shaped leaves are bright green and about the size of an almond.

They are tasty raw in salads or sandwiches. Ellen Zachos, in her book Backyard Forager, suggests a sauté with olive oil, feta, garlic, oregano and tomatoes as a side dish.

Mike Krebill in his book, The Scout’s Guide to Wild Edibles, suggests pickling the stems and offers a simple recipe for small quantities:

Mix everything in a covered microwaveable bowl and on put on high for 6 to 7 minutes in the microwave. Stir twice until purslane is tender and onion is translucent.

Store for up to three months in a sterilized jar. By which time there will be another crop of delicious weeds to harvest.