Photo by Judith Hausman Apples were in full stock at Atwater Market in Montreal. The Hungry Locavore is a Francophile from way back—that made a recent weekend trip to the French-North American hybrid city of Montreal even more appealing. I loved the combination we found of sturdy, New World Canadian with enduring European influences. You […] 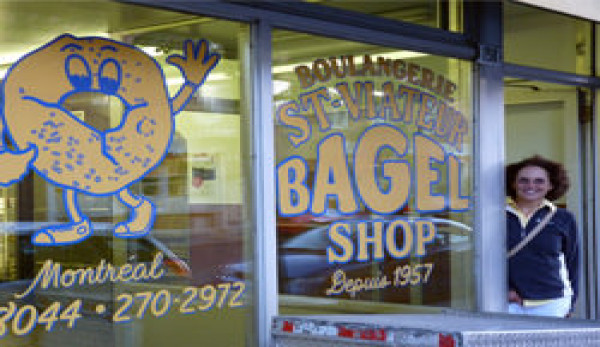 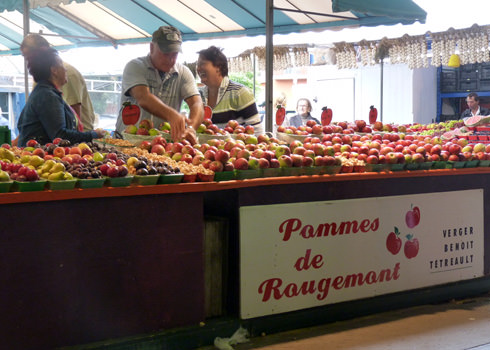 Apples were in full stock at Atwater Market in Montreal.

The Hungry Locavore is a Francophile from way back—that made a recent weekend trip to the French-North American hybrid city of Montreal even more appealing. I loved the combination we found of sturdy, New World Canadian with enduring European influences. You get the best of both worlds in Montreal and for a snowy, northerly territory, the province of Quebec does a remarkable job of promoting local food.

We hopped on our Bixi bikes—a pickup and drop-off bike scheme, as successful here as the Velibre is in Paris—and headed for the Atwater Market. Early September was the best of both worlds as well at the market. Summer tomatoes and string beans were still plentiful, but Brussels sprouts, garlic, apples and ground cherries crowded the stands as well. Inside the market hall, the hearty pork traditions of French-Canadian food were on display, as were smoked fish, meat pies, maple products, thick bread and artisanal local cheeses. 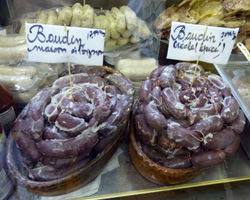 Rolls of boudin (aka sausage) at Atwater Market.

My companions scored on their hunt for spruce beer, an amazingly refreshing and adult soft drink (it’s beer, like root beer is beer), which tastes a little like sweetened, lightened retsina. Marco Beverages makes, nonalcoholic maple syrup beer and birch beers, too, in thick, brown glass bottles, sealed with a metal swing top.

Even the supermarket near our lodgings sold local plums, pears and apples, as well as many Canadian cheeses. The only specialty I just couldn’t take a liking to was poutine, a plateful of French fries piled with chewy cheese curds and topped with gravy. Comfort food for the Québécois, but not for me.

We headed back toward the border after several amazing meals and the best pastrami (aka smoked meat) and wood-fired bagels (maybe better than New York’s even). 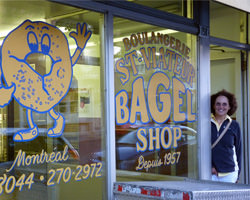 You-know-who peeks out the door of one of the legendary Mile End bagel bakeries.

We had just enough time to get off the highway and follow the Circuit du Paysan for a while. The Peasants’ Trail, which passes through the area between Montreal and the U.S. borders with New York and Vermont, is very well-marked off the highway and along the back roads and is mapped in brochures. Visitors stop and sample from participating orchards, vineyards, cheesemakers, craftspeople, cider makers, historical sites and alpaca farms. We managed an all-in-French tasting at Domaine St-Jacques, and we saw that the season of apple-picking, hard cider-tasting and orchard-picnicking was underway at Petch Orchards and La Face Cachée de la Pomme (the Hidden Side of the Apple makes Neige hard ice cider, a delicacy). With more leisure, we would have stopped  to buy honey, cheese and fine sausage as well along the way.

It was inspiring how easily we could locate local farms and products in a corridor that seems to support and understand how farms add to tourism. The moment we crossed through the backed-up border into Upstate New York, dairy and farm country, too, the landscape turned bleak and depressed, rather than rustic and vibrant.

Along with cheese, spruce beer, wine and apples, I brought back some locally grown buckwheat flour to try to make authentic French-Canadian plogues or ployes. The thin buckwheat pancakes are served for breakfast, topped with syrup, spread with cretons, a spicy pork meat spread, or cheddar cheese or rolled up as a substitute for bread. Buckwheat grows well in the brief Acadian summer.

Preparation
Mix dry ingredients. Add water and let stand for at least 10 minutes. Then spoon onto a lightly greased, hot griddle to make thin 6″ pancakes. They are ready when they are bubbled and firm. Cook only on the one side.