Photo by Judith Hausman Around my house, we heap our latkes high with horseradish, sour cream and homemade applesauce. I argued with my kids for years about our latkes, the potato pancakes traditionally served during the Jewish winter holiday of Hannukah, because I tried to make them a) healthier and b) less labor-intensive. Latkes are […] 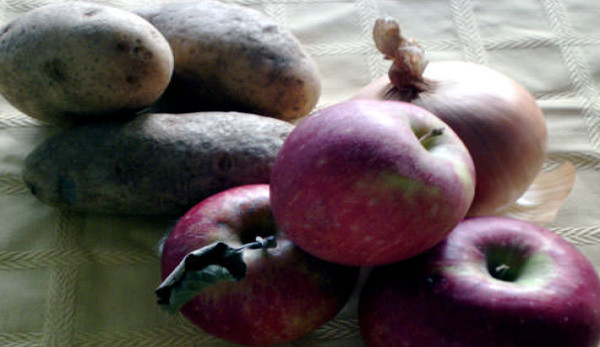 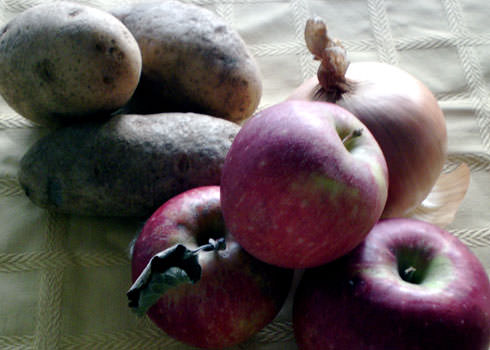 Around my house, we heap our latkes high with horseradish, sour cream and homemade applesauce.

I argued with my kids for years about our latkes, the potato pancakes traditionally served during the Jewish winter holiday of Hannukah, because I tried to make them a) healthier and b) less labor-intensive.

Latkes are supposed to be pan-fried in oil, and they really must be consumed right away. If not, the grated potato turns a nasty kind of blue-gray, and before you know it, youâ€™re turning out little hockey pucks instead of savory, lacey pancakes. That means you have to move fast once the potatoes are grated, and someone (thatâ€™d be me) has to stay at the stove frying the little beauties while the rest of the gang heaps them with (homemade, local) applesauce, sour cream and red-beet horseradish. Oh, and if you can manage to stew a tender, grassfed brisket with onions and carrot gravy to eat with the latkes, thatâ€™d be nice, Mom.

Iâ€™ve actually won everyone over on the first count (healthiness). At first, they protested to my experiments with add-ins, such as scallions, zucchini or sweet potato. But today, at the last pick-up of my CSA (boo hoo), I was able to choose solid, dusky potatoes; chunky parsnips; rosy-orange carrots; and bright, last scallions. All of them together will become latkes; now, the whole family welcomes sweet potatoes or winter squash into the mix, as well.

After a trip through my food processorâ€™s grating blade, the mix will be quickly blotted dry and whisked with just egg and a little flour before sizzling into the oil. The real traditionalists still swear by hand-grating the potatoes through the smallest holes, resulting in a kind of mush from which the water is squeezed out in a towel. I like the lacier style rather than this more solid style, so the mix of colors and flavors stands out.

On the second count (ease), fuggedaboutitâ€”Iâ€™ve given up. I tried several well-meaning techniques over the years, such as spraying the pancakes with Pam and baking them, spreading the potato batter in a square pan like a potato side dish, or sautĂ©ing them like a Swiss rosti or hash browns into one big potato cake. I reasoned that these methods would free me up to eat with my family and also to use less oil. But latkes just have to be deliciously oily. My kids have to steal the crispy corners as they drain on brown paper (undone grocery bags). The meal has to be a production line with comments, shouts for more and lots of â€śmmmmmmâ€™s.â€ť We donâ€™t argue about them; after all, I only make them eight nights a year.

Hannukah is a time for socializing at the table, lighting candles, telling stories and playing games. Guests and family go back and forth from the stove to the table, trade recipes and reminiscences. And now, I can offer them local latkes in all their glory, filled with the vitality of vegetables grown right near home and fortifying us (with all that oil) for the dark winter.