First Look, Then Plan When You Repair An Old Pond

Restoring an old pond is a multi-step project, as one farmer details through his ongoing quest to locate and repair a leaky bank. 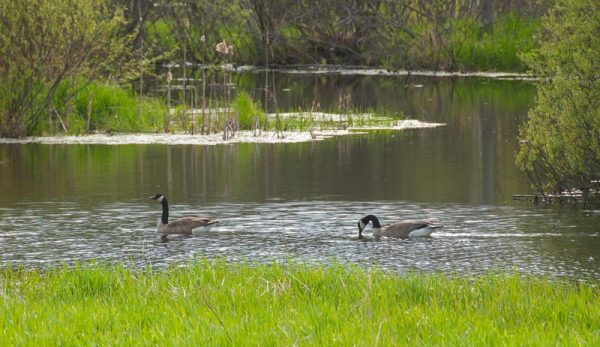 Once upon a time, a long time ago, the previous owners of my northern Wisconsin farm built a multi-purpose pond for both performance and pleasure.

The majority of the pond was enclosed by fence and featured a couple of wooden docks. The remainder of the pond was open and accessible by the dairy cows roaming the surrounding fields and woodlands.

But that was a long time ago. The pond hasnâ€™t been used by cattle in forty years at least, and it’s in need of some repair.

And while the more recent past has seen the pond provide a habitat for wildlife (a large population of spring peepers and the occasional pair of nesting mallard ducks), the pond is slowly losing its battle for survival.

It’s been rooted with aquatic vegetation for as long as I’ve known it. Cattails and water-loving grasses gradually diminish the size and depth of the pond.

Though the pond currently serves no practical purpose on my farm, in the back of my mind Iâ€™ve always wanted to repair and restore it to its former glory. I dreamed of removing the masses of plants (both dead and alive) and repairing the banks to expand its usefulness as a wildlife sanctuary and aesthetic attraction.

My desire has been hastened by the sudden, dramatic decline of the pond over the last few years ago. Seemingly in the blink of an eye, the water volume of the pond dipped sharply. At this point, itâ€™s become more of a marsh than a genuine water feature.

Should you dredge your farm pond? Maybe, though you need to do it right.

Confused by this rapid regression, I started examining the pond in closer detail last year. Then I plotted a course of action to begin the restoration.

Its design is clever. Itâ€™s situated near the bottom of a north-facing slope, with a large clay bank built on the north side to capture and contain the rainwater (and spring meltwater) that naturally flows downhill.

I focused my attention on the north bank, noting how the water seemed to be carving its way underneath the bank. I began to suspect the water had found a way to breach the bank. Sure enough, my suspicions were confirmed this spring when snow melted and the pond thawed.

Though the pond tried to fill, I could hear water rushing and gurgling its way under the bank. Here, it flowed through a large rock pile and out into a low clearing behind the pond.

Having identified the cause of the pondâ€™s sudden decline, the course of action I need to take is straightforward. Clearing out aquatic plants can wait. Before anything else, I need to restore the integrity of the bank, or all other efforts will be for naught.

Here’s how to build a pond to support local wildlife.

But repairing the bank will be easier said than done.

Itâ€™s a narrow bank with steep slopes. The north side is blocked by a sturdy row of windbreak trees. This makes it virtually impossible for large machinery to access the bank without plunging straight through the pond itself.

So instead of tackling the job with horsepower, Iâ€™m using manpowerâ€”my own muscles, coupled with a digging spade. I made an effort right away in the spring to find the exact location of the leak. But my attempts were foiled by frozen ground.

I did, however, remove a few chunks of sod. Once the ground thawed, I was pleasantly surprised to see a small portion of the north bank collapse entirely, revealing the hidden tunnel.

Slowly but surely, Iâ€™m gaining ground in my battle to repair the pond. Spring is a busy time of year, but as soon as things slow down a little, Iâ€™ll be back at the pond with my shovel in hand, cutting away the sod to fully expose the fractured section of the bank.

Since the depth of the pond has sunk below the tunnel at this point, I plan to plug the opening as thoroughly as I can with clay soil and rocks. Then I’ll wait patiently for next spring to witness the fruit of my labor.

With a bit of luck, the bank will hold solid and the pond will fill to a level approaching its long-ago peak, the first step toward restoring the pond to its former glory.