Hard work and tradition surround the livelihood of water buffalo in Cambodia. 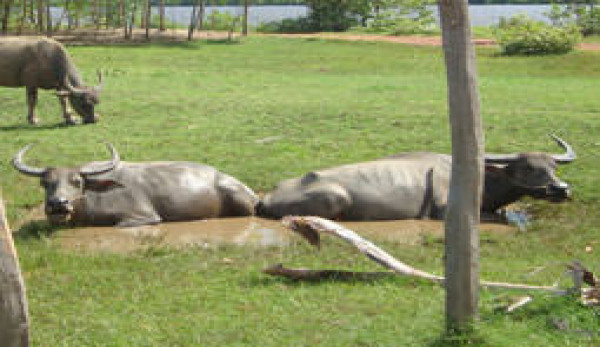 Traveling through the provinces of Cambodia on an old rickety charter bus, I was glued to the window. Cambodia is an agrarian economy; you venture 10 minutes outside the capital city of Phnom Penh and are in the throws of the “countryside.”

In the rainy season, when crops begin their growth, endless waves of green rice paddies stretch as far as the eye can see, with 20-foot palms scattered throughout the fields serving as the horizonās only interruption. Cattle freely walk the streets, often with a small child following behind to herd. And water buffalo poke their heads and horns out of deep mud puddles.

I loved seeing the water buffalo escaping the tropical heat with a dip in a puddle. It added an unexpected softness to the massive beast. Contrary to what their pointy horns and gigantic snouts imply, Cambodian water buffalo are gentle creatures and a staple to Cambodian farmers, especially for people living and working in the flood plains, where cows are less useful.Ā

Water buffalo are often regarded as a precious inheritance. In rural areas, where the average income is less than $500 per year, farmers must own a water buffalo or a cow in order to earn a living. Often people will own two water buffaloāowning more indicates that the family is well off.Ā

During his preschool years, Kimsoeun Seat watched over his grandparentsā water buffalo in the eastern province of Kompong Cham. He recalls the animals being gentle and hardworking and most of all easy to take care of, considering he was doing it at such a young age.Ā

However, in a country steeped in tradition, the livelihood of Cambodian water buffalo includes more than just hard work. During the countryās festival of the dead, in which the Cambodian Buddhists pay homage to their dead ancestors, people engage their water buffalo in races, among other games.

āEveryone decorates their water buffalo with colored fabric streamers,ā Seat says. The water buffalo races add a spark of fun to a rather somber holiday.

As an outsider in a foreign country, I was taken by the way water buffalo are a part of society. They eat, sleep and work alongside their human counterparts. They are not cast off in a field with the other livestock. The relationship between water buffalo and humans in Cambodia is integral to continuing their agricultural way of life.