Last week, David from Omaha commented on how often we don't take a minute to find the right tool and use something else instead. He's very right about that; however, sometimes the right tool just can't be found. 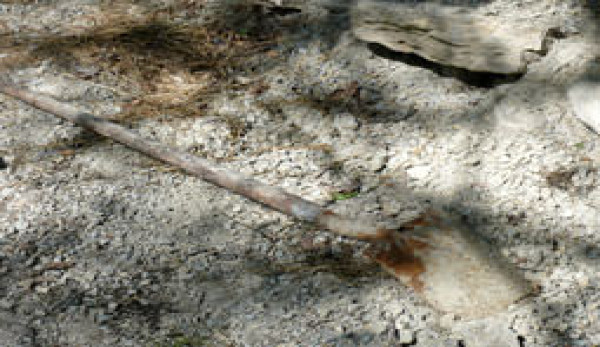 Last week, David from Omaha commented on how often we don’t take a minute to find the right tool and use something else instead. He’s very right about that; however, sometimes the right tool just can’t be found.

Last year, I lost my best spade. Best meaning the handle was still pretty good and the steel hadn’t started to tear like my second-best spade. (That one did tear in two later in the summer). I could not for the life of me recall the last place the spade had been used. I walked the gardens, our paths through the woods, and even the edges of the woods in case I had been doing some trimming. Finally, I gave up and bought a new spade.

The other day, I was working at the end of our driveway, getting ready for a load of wood chips to be delivered. The driveway end has a 2-foot retaining wall. Gravel on the lower side of the wall covers a walkway around the retaining wall to the dog’s winter home.

As I was working there, moving bales in to act as retaining walls against the soon-to-be chip pile, I noticed a bit of bare steel in the gravel. Moving a bit more gravel away, my trusty spade was found.

About a year ago, I had ordered a load of gravel. The dump had cascaded gravel over the retaining wallâ€”right where I must have been working with the spade shortly before. As I carried away the gravel with a rented skid-steer loader, the spade had remained covered. The last few inches of gravel had been left for the walkway â€¦ and to cover the spade.

For all of the abuse it took, the spade is still in pretty good shape. I’ll let you know how the restoration goes.