Founder Heather Hansen from the Tennessee-based farmstead Hilltop Farm tells us how her faithful pack of dogs safeguards the welfare of their adorable Kunekune pigs. 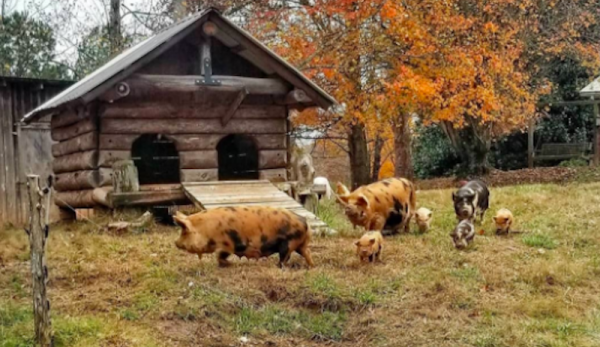 “I want to say farming was born into me,” explains Heather Hansen from Hilltop Farm in Tennessee. As a kid, Hansen would sneak off to hang out and spend the day at a local stable. “They got so used to me they’d let me stay and help out,” she recalls.

After studying agriculture at college, Hansen went ahead and founded Hilltop Farm. Now the family-run farmstead houses an array of Kunekune pigs, goats and poultry, all looked over by the property’s resident Great Pyrenees dogs.

We spoke to Hansen about the appeal of her Kunekune pigs and the importance of livestock guardians. We also got to the bottom of a circular mushroom mystery.

The Wonder of Kunekune Pigs

“We had been breeding pigs for 10 years. And I’d taught agriculture classes at the local college and had a pig project going on there,” says Hansen, when asked about how she came to make pigs a focus of Hilltop Farm.

“Pigs are wonderful for various reasons. But here in the mountains, if you free range them, traditional commercial pigs tend to tear up land,” she adds. “In the mountains, that’s not a good thing.”

After Hansen’s husband ran into someone who had some Kunekune pigs, he called her up and told her about the breed. “Within weeks of meeting them, we took up our first Kunekune,” says Hansen.

When it comes to the appeal of Kunekune pigs, Hansen describes the breed as “just different in every wayâ€”personality, snout length, marbling in their meat.”

Hansen lauds her Kunekunes as “wonderful” to spend time with. “They’re friendly, they come when they’re called, they sit and wait for treats like dogs. They will let you lay right beside beside them in the stall. And they love to be scratched and brushed. They’re very affectionate pigs.”

The Role of the Farm’s Great Pyrenees

Great Pyrenees dogs play a crucial protective role at Hilltop Farm. “Great Pyrenees are a traditional livestock guardian, so they love to protect and bond with livestockâ€”and people as well. And they faithfully protect their herd,” explains Hansen. “That herd can be anything. It can be sheep, it can be ducks. It can be pigs and horses or a combination of any of them, including poultry.”

Recently, Hansen came across a cluster of mushrooms that had grown in a mysterious circular patternâ€”seemingly of their own volition.

“It’s called a fairy ring,” explains Hansen. “I was told that in the past there must have been a really big tree there. It died and rotted, and the fungus stayed alive under the soil. But when the conditions are right, it just popped out where the trunk would have been.”

Forging Connections with the Animals

“We work as a family. And we have connections to all the animals,” says Hansen, summing up the most rewarding part of running Hilltop Farm. “The animals are loved and cared for. And we establish relationships with them. It’s been great to teach that connection to our children along with the work ethic that goes into good relationships.”