Once you've mastered the important skill of correctly identifying chanterelle mushrooms, you can use this DIY mushroom picker to make foraging easier. 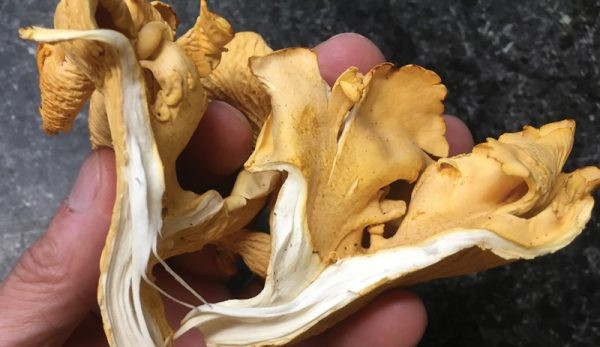 Even when people declare they know nothing about mushrooms, thereŌĆÖs one they almost always ask about in the next breath: ŌĆ£Have you ever found any chanterelles?ŌĆØ

A charming name, an egg-yolk color, the fragrance of apricots (sometimes) and a flavor described as spicy or nutty conspire to make chanterelles among the most sought-after wild mushrooms. Foragers in the Pacific Northwest ship 5 million pounds a year to Germany alone.

Chanterelles (Cantharellus cibarius) can be served saut├®ed, in a soup or casserole, or, most commonly, in omelets. (Even store-bought mushrooms should not be eaten raw.) Chanterelles can be dried, but they donŌĆÖt rehydrate well. If you have a surplus, saut├® them in butter or bacon fat for a few minutes, scoop them into a muffin tin (so they donŌĆÖt freeze in a big clump) and briefly freeze them before tossing into plastic freezer bags.

ChanterellesŌĆöor ŌĆ£chantsŌĆØ as foragers call themŌĆöshow up between May and September in the East, September to November in the Northwest, and in winter in California. They collaborate with tree roots, so youŌĆÖll find them on the forest floor. That also means they canŌĆÖt be grown as a crop.

At full height, they are no bigger than a day-old chick (and are almost as cute!).

They are also the mushroom most likely to get novice foragers into trouble. Twenty years ago a friend of mine, relying only on a foraging book, was sure he had found a patch of chanterelles. A chef of his acquaintance was equally sure and offered to buy them. He declined, having committed himself to preparing them as part of a romantic dinner for his wife.

The mushrooms were delicious, the dinner was romantic and, in fact, it led to a bonding experience for them both: the shared misery of three hours spent hugging the toilet. They werenŌĆÖt chanterelles, but Jack OŌĆÖLantern (Omphalotus olearius) mushrooms.

This story points up three things.

So how do you tell the difference between chants and the vaguley similar Jack OŌĆÖLanterns? ItŌĆÖs actually easy, and you only need to know two things to keep them straight.

First, slice the mushroom open. Chants will be white on the inside. Jacks will be as orange inside as out.

Second, thereŌĆÖs a difference in the gills. A JackŌĆÖs gills will all be perfectly parallel and deep, but the gills of a chant (they are really ŌĆ£false gillsŌĆØ but no need to go into that now) will be shallow and have several forks and crossings.

So if the gills cross and the inside is white, you can indeed cook them, enjoying a romantic dinner with your partner.

Read more:┬ĀCheck out this quick guide to getting mushrooms right.

What if there was a tool for harvesting chanterelles and other mushrooms without bending over? And what if that tool also had other uses: a walking stick, snagging mushrooms up on a tree, ripping through spider webs in the woods instead of using your face, raking back leaves that cover short mushrooms, and avoiding being face-to-face with the occasional snake?

Woody Collins has invented a DIY mushroom picker that solves all those problems. He is what the young folks might call a ŌĆ£maker.ŌĆØ

Before he became a mushroom hunter in the Lowcountry of Beaufort County, South Carolina, he spent 30 years on shrimp boats as mate and captain. As those who work in farming and fishing know, sometimes the budget isnŌĆÖt there to buy some dandy tool so you have to make one yourself. And sometimes those tools are concocted with stunning creativity, especially when youŌĆÖre several miles at sea.

Retired from shrimping, Collins now gathers many pounds of chanterelles that he finds in the LowcountryŌĆÖs Gothic forests of live oaks draped with Spanish moss. HeŌĆÖs still plenty spry, but when he wanted a quicker way to get those mushrooms into his basket, he put his maker skills to work. ThatŌĆÖs how he invented this DIY mushroom picker.

HereŌĆÖs what you need to make a DIY mushroom picker of your own.

Granted, not everyone has the skills or the interest in making even a low-tech tool like this DIY mushroom picker. It may be a good opportunity for the handiest members of a mushroom club to make and sell them as a fundraiser for the club. Or a self-employed mushroom hunter may want to offer them for sale to the public as I do at my foraging classes.

And, of course, in my mind, IŌĆÖll thank Capt. Woody every time I use my own DIY mushroom picker!

This article originally appeared in the July/August 2020 issue of┬ĀHobby Farms┬Āmagazine.