Recognizing microclimates in your yard (or creating them with things like shade cloth) can help your garden thrive in optimal growing conditions. 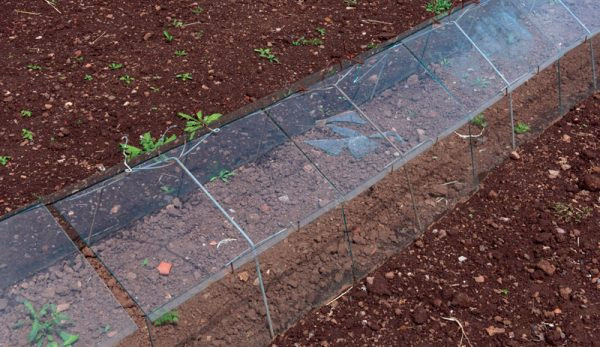 With more frequent storms, greater temperature extremes and myriad other changes taking place, gardening isn‚Äôt quite as straightforward as it used to be. Just ask Charlie Nardozzi, a gardening expert and author. He‚Äôs been tending fruits, flowers and veggies for more than 30 years.¬†

‚ÄúHeat is definitely an issue. And it‚Äôs not just something for people in the Southwest or in the South where you get really extreme, hot days in the summer and lots of them,‚ÄĚ Nardozzi says. ‚ÄúEven in northern places, like in Vermont this year, for example, the temperatures did not get below 80 degrees for I don‚Äôt know how many weeks in a row, which is unheard of for us. We are seeing a lot more extremes on both the hot side and the cold side, too.‚ÄĚ

[Note: July 2020 was the warmest month on record for Burlington, Vermont‚Äôs most populous city. ‚ÄĒ Ed.]

From the 1950s to the 2000s, there were certain extremes that gardeners would complain about‚ÄĒan insect or certain disease or something, according to Nardozzi.

‚ÄúBut it was never so extreme that it would just wipe us out,‚ÄĚ he says. ‚ÄúWe‚Äôre really getting more of that kind of weather now where, in one fell swoop, you could have a wind storm that blows things over or a drought that just kills everything.‚ÄĚ

Gardeners may not be able to control the weather, in general. But we certainly can be more prepared for it and much more intentional about protecting everything we hope to grow. That means assessing our individual microclimates and making the necessary landscape changes to give our plants a leg up.

Odds are you‚Äôre already aware of certain spots in your garden that stay soggy, get buffeted by high winds or remain super shady. Features specific to your land‚ÄĒsuch as elevation, topography and the number and size of trees you have‚ÄĒall influence your hyperlocal growing conditions.

These are microclimates. And as the name suggests, they can apply to very small areas.

For instance, the land along the south side of a low wall or the south side of a house or outbuilding may be slightly warmer than other areas. These southern exposures soak up the sun‚Äôs rays. Any associated hardscaping such as pavement, brick or stone will also act as a heat sink.

They also serve to block winds that cool and dry out the soil.¬†

Depending on their needs and the time of year they‚Äôre started, plants positioned in these warmer microclimates could struggle or thrive. Do you want to get a lettuce crop growing as early as possible? Because they‚Äôre slightly hotter and they radiate heat, warm microclimate areas such as these are well-suited for early plantings.

However, that same lettuce crop might bolt earlier in the warm microclimate area once the growing season progresses and overall temperatures rise.

Read more: Check out these 6 tips for getting lettuce through the hot months without bolting.

Other factors can also determine microclimates, including:

‚ÄúIf you have a dip in the land, the cold air settles there,‚ÄĚ Nardozzi says. ‚ÄúIf you have some slopes on your land where you have a low spot, those are the places where you are going to get the late spring frosts or the early frost in the fall that will kill things. You have to be aware of that, if you are growing things that are frost-sensitive. Maybe you don‚Äôt put them in those areas.‚ÄĚ

To get a sense of your own microclimate, Nardozzi recommends observing your yard during different times of the year. Then, make notes accordingly. Gardeners living in areas that get snow should pay attention to its melting patterns.

‚ÄúEvery spring, I know where it is going to be snow-free for the first time in our yard,‚ÄĚ he says. ‚ÄúThere‚Äôs a certain area that is kind of protected. It has a southern exposure. The snow melts really quickly there. So, that‚Äôs an indication that is a microclimate spot….

“And, going the other way, where is the snow still there in April and May even after you‚Äôve had some warm days? It may be a little shadier there or protected from the sun.‚ÄĚ

Windy days are also helpful in assessing garden microclimates. ‚ÄúSay I know the winds are coming in from the north and maybe a cold front is coming through, but [I notice it‚Äôs] not so windy over here,‚ÄĚ Nardozzi says. ‚ÄúYou can do that again, if you know there‚Äôs a storm coming in from the south. You‚Äôre just kind of getting a sense of where the calmer spots are in your yard and where the really windy spots are.‚ÄĚ

The same goes for shade. Find those places in your yard that provide a little respite from the heat‚ÄĒespecially from the afternoon sun. If you find cooler areas that¬†afford morning sunlight and afternoon shade, earmark these for plants most susceptible to sunscald.

Made in the Shade

Once you‚Äôve identified the various microclimate spots in your garden, you‚Äôll be better equipped to mitigate them. This is particularly important in the face of climate change.

If you have some areas that are extra susceptible to heat, you can modify the growing environment. Plants you install in these hot spots will be less likely to wither and die.

‚ÄúIt is all about creating microclimates‚ÄĒnot just [identifying] the ones that are already around your house,‚ÄĚ Nardozzi says. ‚ÄúYou can create microclimates in the garden itself by using things like shade cloth.‚ÄĚ

Similar to a floating row cover, which is used as a barrier against insects and frost, shade cloth also comes in various protective weights. ‚ÄúYou can get shade cloth that will block off certain percentages of light, depending on the thickness of it,‚ÄĚ Nardozzi says. ‚ÄúA lot of it will depend on how hot it is, how much shade you need and how much shade the plants you are growing can tolerate.‚ÄĚ

‚ÄúYou are starting to see a lot of people looking more and more at shade cloth, which is another thing that we in a northern climate like Vermont never used to think about,‚ÄĚ he says. ‚ÄúWe are always trying to get as much sun as possible. But because of the heat in the summer, we may need to put shade cloth over our plants during some periods.‚ÄĚ

Many commercial growers in the sun-drenched southern and western parts of the United States are already familiar with shade cloth. But gardeners coast to coast may increasingly turn to it to create microclimates and help beat back the heat.

Available in a range of percentages, most gardening shade cloth is made to diffuse the sun‚Äôs rays by between 30 and 75 percent. Depending on the percentage of shade afforded, the shade cloth can also cut the temperature around shielded plants by as much as 20 degrees or more.

Very windy microclimate areas can make winter weather feel even more wintry, potentially killing frost-sensitive plants in the process. To modify these conditions, use other plants as protection.

‚ÄúYou can create hedge rows that will block the wind or block the sun, if that is an issue,‚ÄĚ Nardozzi says. ‚ÄúSheltering that spot can make it much warmer.‚ÄĚ

So can building windbreaks from stone, brick or even wood. Each of these will absorb and subsequently release varying degrees of heat. They may also protect crops from severe storms.

‚ÄúThey are built into the raised bed itself,‚ÄĚ Nardozzi says. ‚ÄúThey make sense, because with these extreme weather events, if you have a cover over those plants, then they are not going to get so much rain dumping on the plants or, like, a hail storm hitting the plants and destroying them.‚ÄĚ

No matter what kinds of microclimates you notice in your garden, building resiliency into your soil can help you hedge against too much heat, wet feet, extreme cold and even very dry conditions.

Amending the soil with rich, well-aged compost and mulching with organic materials can help to moderate soil temperatures and promote drainage and aeration. In lieu of leaving bare ground exposed, planting living ground covers helps, too. They can take up excess water during big deluges.

‚ÄúThe best way to mitigate any kind of extremes is to have soil that is healthy and well-draining, so that when you do get a lot of moisture coming down, it can be absorbed and moved away from the plant roots,‚ÄĚ Nardozzi says. ‚ÄúBut, on the other extreme, too, when it really dries out and you have a drought, there‚Äôs enough organic matter in that soil that it will retain that moisture.

‚ÄúWe just have to be much more proactive in thinking about our landscapes, how our plants are growing in the landscapes and how we can take care of them with some of the smaller fixes like shade cloth and floating row covers ‚Ä¶ during these tough times.‚ÄĚ¬†

This article originally appeared in the March/April 2021 issue of¬†Hobby Farms¬†magazine.