Minimize labor costs and maximize your strawberry patch's place on the farm by starting a strawberry U-pick operation. 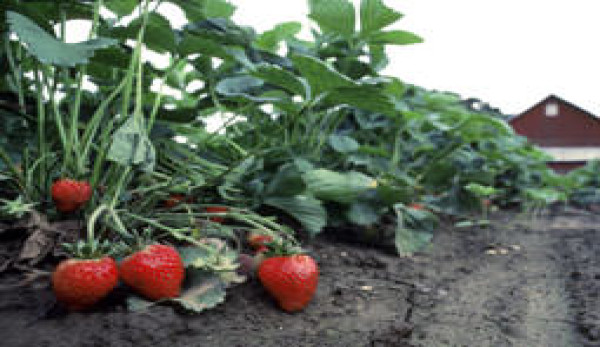 For little plants,Â strawberry bushes can produce an amazing amount of fruit. The fields on the big farms in California yield 25 tons of fruit per acre, while the average yield on a North American U-pick operation is between 5,000 and 8,000 pounds per acre. In just about any garden, an 18-foot row, 18 inches wide, can produce 30 to 45 pounds of fruit. Whatever the size of your strawberry patch, this prolific crop can translate into increased revenue for your farm.

The big farms of California bring in $400 million annually, and Florida produces hundreds of millions each year, too. The U-Pick operations in North America bring in many millions of dollars themselves. Without a doubt, there are a lot of people making money growing strawberries, and this is a crop for which there are not any major subsidies.

Some growers make thousands of dollars of profit from very small operations, but of course that does not mean you will, too. Profit, the common goal of farming operations, is a slippery and elusive target, and it doesnâ€™t come to anyone in the first year. According to 2001 estimates provided by North Carolina State University, the total annual production, harvest, and marketing costs for a plasticulture production system were estimated to be $13,540 per acre. The capital investment alone of establishing a field, from the cost of planting equipment to soil amendments, will likely take several years to recoup.

Keep in mind that with strawberries also comes a high labor cost. Fresh berries donâ€™t last long, and they need to be picked almost every other day. To combat this added expense, many small farmers opt to go theÂ U-Pick route.

Strawberry U-Picks can be found around the world, from Arkansas to Newfoundland. For small farmers, operating a popular public picking field is the single most profitable method of strawberry production. Being able to charge higher than wholesale prices and simultaneously avoid the high costs of harvesting can be a great combination.

The keys to a successful strawberry U-pick operation are location and promotion. Small plots, perhaps even as small as 1/8 acre, can thrive if are in a highly visible location. More remote picking operations will require energetic promotion to encourage customers to visit the farm. Itâ€™s common in the northern United States and Canada for strawberry farms to offer additional rural recreation, such as petting zoos, hay rides, rustic craft sales and other self-service crops, such as pumpkins, orchard fruit and Christmas trees.

The rule of thumb for U-Pick operations is 1 one acre needs at least 2,000 otherwise unserviced customers living within 45 miles. If you think you have a sufficient potential customer base, and that you have the combination of farming skills and promotional flair, strawberries could be a tasty part of your farmâ€™s future. Be a good scout and be prepared, because both producing strawberries and making money require good planning.

This article first appeared in the Summer 2002 issue of Hobby Farms magazine.