Yesterday, one of Dad's coworkers gave him a big bucket of fresh wild plums. Uzzi and I got to eat some! Mom even took out the pits. 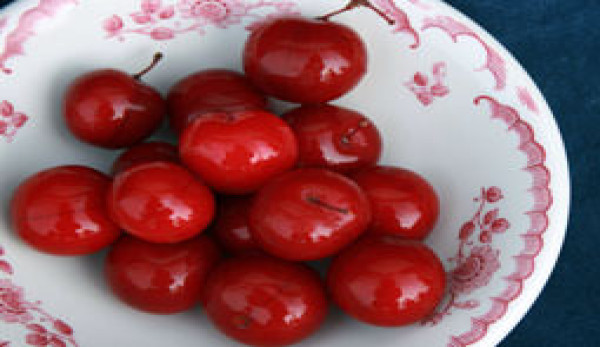 Yesterday, one of Dad’s coworkers gave him a big bucket of fresh wild plums. Uzzi and I got to eat some! Mom even took out the pits.Â

There are two kinds of plums: Old World plums, like the ones you buy at the store, and New World plums. The fruit we ate was from wild, native-American plum trees. According to the USDA, the American plum is the most widely distributed wild plum in North America. It thrives from southern Saskatchewan east to southern Quebec and Maine, then south to Arizona and Florida, and it grows in every continental U.S. state except Oregon, Idaho, California and Nevada.

Plum trees grow easily from seeds. (Eat some plums and plant your own.) Birds like to perch onÂ fences to eat ripe plums, so thickets of plum trees often grow along fence rows. Plums also formed thickets where old wagon trails crossed the Kansas prairies, and you’ll find them near buildings on abandoned homesteads. Wild plums are disease-resistant and cold- and heat-hardy. Wherever plum pits landed, plum trees grew.

American plum trees can be 4 to 20 feet tall. They have thorny limbs and pretty, white flowers that bloom when they leaf out each spring. Plum trees bear globe-shaped, thick-skinned, red or yellow fruit about 3/4 to 1 inch in diameter. In some places, wild plums taste sweet, and in others, they’re sour. Mom says she and Dad called the ones that grew in Minnesota “spit plums” because the skins are very astringentâ€”if you spit out the skin and pit, the rest is sweet. Here in the Ozarks, plums are sweet, though sweetness varies from tree to tree. When you pick wild plums, sample each tree before you pick, and watch out forÂ wasps because they like plum fruit, too!

Wild-plum jam, jelly and pie are yummy! You can dry wild plums for later use, too. Or do like Mom does, and make super-easy wild plum sauce in a slow cooker. Here’s how:

Wash the fruit and remove stems, then fill your slow cooker to the brim with plums. Add 1/2 cup water. Cook on high for 3 hours, then switch to low and cook for 12 more hours. Cool, and then press the pulp through a colander or food mill to remove the pits and skins. Return the pulp and juice to the slow cooker, and add sugar to taste. Simmer on low for 12 more hours or so, then remove the lid, set the slow cooker on high, and cook until the mixture has thickened, stirring occasionally so the pulp doesn’t stick. When the plum sauce is finished, can the sauce or freeze it the way Mom does. She puts it in 8-ounce containers and pops it in the freezer. Done! When you thaw it you can eat it plain or as topping for ice cream, pancakes or Lemon and Olive Oil Cake. Or eat it while it’s still semi-frozen. That’s Mom’s favorite. Yum!